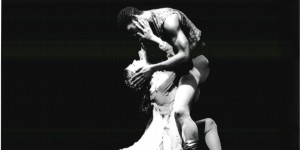 In the world of dance the question of engaging new audiences continues to be a hot topic. Artists and organizations are experimenting with a variety of ways to share their work both in and out of the dance community. One example of this is a partnership between the Joffrey Ballet School (JBS) and DanceOn, one of YouTube's top ten multi-channel networks.

To launch the new partnership, Joffrey and DanceOn created the #RisetotheJBSChallenge video contest which promotes the first annual Elite Dance Tournament -- a new competition and master class series taking place in winter and spring 2015 -- a collaboration between the Joffrey Ballet School and Complexions Contemporary Ballet.

Davis Robertson, Artistic Director of the Joffrey Ballet Concert Group (JBCG), and Desmond Richardson, Co-Founder of Complexions Contemporary Ballet, took a moment to chat  about their expanding partnerships, the #RisetotheJBSChallenge, and how they envision not only growing their audiences, but also developing young dancers.

Complexions dancers, Jillian Davis and Phill Orsano, discuss their schedule for the shoot with Director Desmond Richardson
Breaking boundaries and perceptions creates the foundation of the partnership between Complexions, the Joffrey Ballet School, and DanceOn. The #RisetotheJBSChallenge is just one of many manifestations of that.

JBS and Complexions share a long-standing relationship. Dwight Rhoden, Complexions' Artistic Director, Co-founder and Resident Choreographer, not only teaches for the school regularly, but has also created work for the Joffrey Ballet Concert Group. Richardson and Robertson acknowledge that the two organizations share an investment in diversity and versatility. Both are looking for ways to unify dance forms and move dance away from outdated perceptions.

They are “not subscribing to a particular version of what a dancer should be,” as Robertson puts it. He laughs when reminiscing on work JBCG has done in schools, “A lot of times we’ll go in and [the students] have this idea that all modern or all classical ballet [is the same]. How do you do a piece that they would like to popular music without it looking like a Miley Cyrus video? Well it’s been done. It’s being done. Complexions is performing that type of thing. We’re performing that type of thing.” This breaking of boundaries and perceptions creates the foundation of the partnership between Complexions, the Joffery Ballet School and DanceOn. The  #RisetotheJBSChallenge is just one of many manifestations of that.

The "dynamic of the individual, the steps...the je ne sais quois of someone that is transposed, even through video, is really fascinating.” Davis Robertson, Artistic Director of The Joffrey Ballet Concert Group.

The contest invited young dancers to share one-minute videos of themselves inspired by movements  demonstrated by dancers of Complexions and JBCG. The videos submitted ranged from simple mimicry  to elaborate choreography incorporating multiple movements. With so many variations, how did Richardson and Robertson choose the eight winners.

According to Richardson, the choice began with a question: What was their intent? “Even if they’re just repeating what they saw, there’s an intent there not just to mimic. You can see whether somebody is really going for it and if the movement has become a part of their repertoire. That’s what we’re looking for, people who incorporate these moves into their standard file so that they can pull them out when they need to.”

Robertson frames the decision around dynamic, “dynamic of the individual, the steps...the je ne sais quois of someone that is transposed, even through video, is really fascinating.”

Both artists recognize that no matter what the movement, it is the individual artistry that they are watching.

Look Out for these Rising Dancers who won #RisetotheJBSChallenge:
Round 1 Winners: Jordan Stephens, Regan Norton, Erin Brothers, Lauryn Ewing
Round 2 Winners: Kaitlin Roberts, Kylie James, Leah Cousins, Jasmyn Reid
Grand Prize Winner: Jasmyn Reid
All eight winners will receive a two-week scholarship to the prestigious Joffrey Ballet summer intensive program. The Grand Prize Winner, selected from the eight winners and chosen by Desmond Richardson, will receive a top-tier ballet solo package of four master classes, round-trip airfare to Los Angeles, a position to compete in the finals at the Elite Dance Tournament and a chance to meet guest judge Nigel Lythgoe.
In its inaugural year, with the Elite Dance Tournament will provide an apprenticeship with Complexions Dance Company; a full-time position with the Joffrey Concert Group; and $180,000 in cash and scholarships, including $10,000 each for the ultimate dancer, studio and choreographer.
Joffrey Ballet Concert Group Director Davis Robertson shooting his lines for the second round of #RisetotheJBSChallenge videos

That value of individual artistry intertwined with their commitment to diversity and versatility, is something both men hope that dancers and viewers take away from this contest. While winners are being chosen, Richardson and Robertson also see the videos as opportunities for learning and development.

“I think that it’s a wonderful thing to actually witness the education of these students,” Richardson reflects. He envisions dancers building their movement toolbox and expanding “their language.” With  new steps in their arsenal, young dancers can continue to investigate their artistry, an investigation that cannot be taught.

JBS and Complexions have many more ideas for engaging students and viewers, and video is a big part of them. Says Robertson, "They’re on the computer. Reaching out to them through the medium that they know is going to get them off the computer and out to experience something through dance.”

“You can help to sculpt it. You can offer philosophy around how to achieve it,” suggests Robertson, “but it’s up to the individual to discover what’s inside them. There’s an aspect of technique you can teach, but that’s something that’s  less tangible.” That is what Robertson loves to look for in these videos and in the dancers he works with- individual artistry rooted in diversity and versatility.

The video contest is just one step. JBS and Complexions have many more ideas for engaging students and viewers, and video is a big part of them. They understand that video is one of the mediums that brought them to dance and look forward to doing that for a new generation. Robertson remembers that it was music videos on television that piqued his interest in dance as a child. Similarly, Richardson relishes in his days spent at the library after being inspired by watching Rudolf Nureyev on PBS, “I would just watch a million videos of anything I could get my hands on.” Richardson frames these experiences around the importance of research, “If there is information out there to get it all, because that’s what I did and it really, really helped me to pursue this career.” Neither television nor the library is a common experience for young artists and audiences today, but they are definitely learning from YouTube. “We have to look at where is our audience right now? What is it that they’re doing on a daily basis?” says Robertson. “They’re on the computer. Reaching out to them through the medium that they know is going to get them off the computer and out to experience something through dance.”