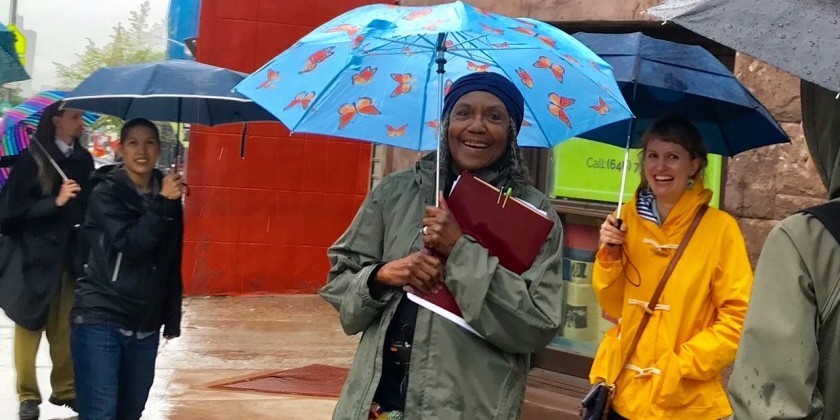 Walking Tour #4: The Book of Sugar Hill According to Brenda

On a rainy Wednesday, award-winning author and dance historian Brenda Dixon-Gottschild led a stroll through Harlem that included the neighborhood where she grew up. This walk was the fourth tour in the series curated by Reggie Wilson for Dancing Platforms Praying Grounds: Blackness, Churches, and Downtown Dance.

Inspired by Wilson’s question of belonging, Dixon-Gottschild asked participants to consider the following: What does it mean to belong? Where do you find your story as you bear witness to my history?

Harlem, once an oasis for affluent white New Yorkers in the early 1800s looking to escape Lower Manhattan immigrants, is now most well known for its Black history. From the Harlem Renaissance to the Heroin epidemic of the ‘70s, the streets hold both romanticized bliss and tragedy.

Dixon-Gottschild centers the tour around her time in Harlem from ages 5-20 (1947-1963). Sidewalks and street signs jog memories of people watching, grocery stores, candy shops, and the drugstore. Tenement buildings scatter along the side streets. Ornate elevator buildings hover along St. Nicholas Avenue as main thruways like 125th Street stretch from river to river. Underground, A/C/B/D lines transport the masses to the upper reaches of Manhattan and the Bronx.

The tour begins at St. James Presbyterian Church at the corner of West 141st Street and St. Nicholas Avenue. This is where Dixon-Gottschild’s daughter took Baba Chuck Davis’ African dance class in the ‘80s. Churches serve as anchor points throughout the tour, reflecting the communities racial and spiritual diversity. Other church landmarks include Mt. Zion Lutheran Church, Convent Avenue Baptist Church, St Luke's Episcopal Church (in front of what is now Hamilton Grange), and Our Lady of Lourdes Church and Convent.

On West 145th Street, Dixon-Gottschild recalls the Brown Bomber bar, named after boxer Joe Louis, where her older brother and sister would hang out and listen to jazz music. She reminisces about people and spaces: the building occupied by the Caribbean seamstress Mrs. Warton; the spot tucked away on the corner where the stout Italian Tony chopped ice; the candy shop owned by Mrs. Mac; the African American-owned smoke shop and shoe parlor; and the Jewish-owned pharmacy.

Most vividly, she describes a tiny room where a Chinese man would offer inexpensive laundry services. The steam would carry warm, fresh linen smells as he pressed, wrapped, and tied the clothes in butcher paper.

Dixon-Gottschild’s block was West 146th Street and St. Nicholas Avenue. On the steps of her building (420, apartment 2) she remembers the streets as her playground. They slept on the fire escape on hot days and watched people going to work in the mornings. “The block was a village. You could play out [on the street] all day. There was a sense of life with the grownups and kids. Hanging out on the street is where the action is, where you learned your stuff.”

“Whoever sees a shooting star in New York City?” Dixon-Gottschild fondly recalls seeing a shooting star on her block and being moonstruck. “That’s what made me feel like I could do anything.”

By the time she was 20 and a senior at City College, Dixon-Gottschild was on scholarship with Mary Anthony and taking free classes on St. Mark’s Place with James Waring. “James would give a free, very eccentric ballet class on Sunday mornings. That’s where I first met Yvonne Rainer and Barbara Dilley. I had to tell my mom I’m not going to Easter Sunday at Convent Ave Baptist Church. I gave up Convent Avenue for James Waring.”

After completing her studies at City College in 1963, Dixon-Gottschild left Harlem, never to live there again. Nevertheless, this block remains part of her dance-scape; a rich history she can share with others that highlights a choreographed ensemble of family, commerce, community, art, religion, and landscape.

We complete the tour in a cafe to consider how we might measure our sense of belonging. Where does our story intersect with another, and how might our belonging exist through varying degrees of association through time? One by one, we recall our histories, relationships to religion, and how our understanding belonging continues to evolve. Interestingly, several people no longer practice the faith they grew up within, yet find themselves performing in churches across the city. What it means to belong shifts beyond place of origin. We create communities where we wish to exist while remembering our histories that have guided us to this point of arrival and departure.

The Dance Enthusiast Shares IMPRESSIONS/ our brand of review and Creates Conversation.
For more IMPRESSIONS, click here, including Opening Night of Danspace Project 2018 DANCING PLATFORM PRAYING GROUNDS.
Share your #AudienceReview of performances for a chance to win a prize.