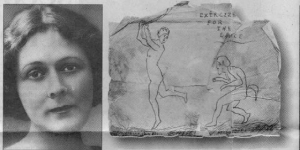 92Y to Unveil "Excercizes for the Dance," A Handwritten Isadora Duncan Manuscript

IMPRESSIONS: "The Art of Isadora" by Lori Belilove and the Isadora Duncan Dance Company at Untermyer Gardens 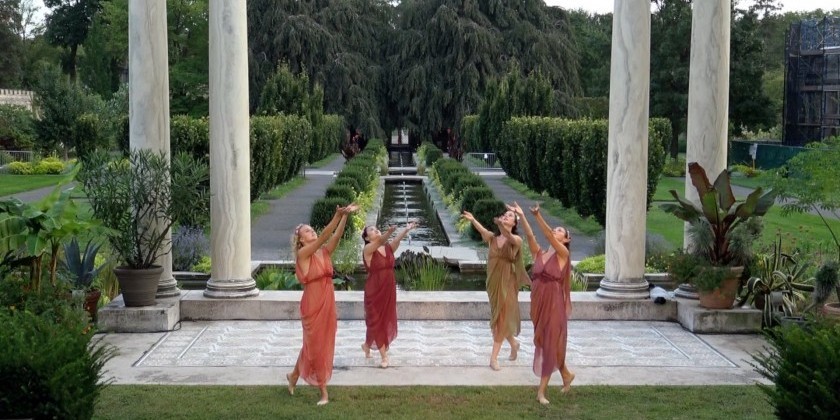 The Opposite of Fear

The spirit of freedom blew through the park, stirring the draperies of the women performing The Art of Isadora at Untermyer Gardens, in Yonkers, on Sunday. What a joy it was to behold this live event! Prancing and capering in the late-afternoon sunshine, Lori Belilove and four members of her Isadora Duncan Dance Company banished the specter of fear—worse than any virus—that has haunted our society for months, leaving us a prey to tyrants.

Belilove instills lightness in her dancers, whose steps are as airy as thistledown. Their gestures are fluid, and their attitude carefree. These women seem to laugh and play as they dance. Yet, lest we forget, the Duncan repertoire embodies a legacy of stubborn individualism; unconventional thinking; and exceptional daring.

Now, more than ever, we need this courage. We should heed the example of Isadora, who shed the false morality oppressing 19th-century women; and identified with the struggling masses. Isadora defied the rise of the Machine Age to return to nature; and, when a machine killed her small children, she found the strength to pick herself up and bravely continue waltzing. Where is her like today?

For Duncan dancers, the world appears eternally fresh and beautiful. Emily D’Angelo, Faith Kimberling, Hayley Rose, and Caroline Yamada drift onto the scene of Untermyer Gardens’ miniature Greek Theater, turning to admire their surroundings with expressions of wonder. The setting is, indeed, remarkable. Behind the semi-circular performance space, half mosaic floor and half grassy lawn, stand two pairs of Ionic columns. Atop each pair of columns, a stone Sphinx sits on her haunches gazing at the view beyond: a flowering pond and a canal flanked by luxuriant greenery.

While most of the dances on this program are “legacy” works, handed down from Isadora to her pupils, others have been choreographed by Belilove “in the style of” Isadora. In the first dance, the women lift their arms softly, and then, seated, they trail one hand in an imaginary brook. They lay their bodies dreamily on the ground. When the women awake and begin to romp, they give themselves fully to the moment bringing the simple gestures alive.

In “Narcissus,” D’Angelo and Rose stir the water of an invisible pool. They attend to woodland murmurs, and fling an arm above their heads thrown back in ecstasy. Rose appears alternately shy and bold in her solo, “Moment Musical,” adding a sweeping folk-dance gesture. Then she drops her casual air to strike a pose, and, in a sudden metamorphosis, she turns to marble. When, D’Angelo returns, the women waltz together in a half-circle, leading each other by the fingers ever-so daintily.

These selections appear overwhelmingly joyous, but shadows are not absent from this repertoire. Quoting from a letter the choreographer wrote to her students, Belilove reminds us that Isadora hoped her pupils would spread “a glow over this sad earth” (emphasis added). What distinguishes Isadora’s attitude from ours today is that in her world, even after the Great War, the shadow is never allowed to triumph. Dancing to a funereal chorus from Gluck’s Orfeo ed Euridice, the dancers form a blind procession, their eyes downcast; yet soon they return to the world of the living, and, as if on cue, the sun emerges from behind a cloud to bathe their upturned faces.

The highlight of the program’s second half, as always, is the solo recalling Isadora’s tragedy. The subtlety of Belilove’s expression convinces us we are witnessing a private moment, as, cradling a bouquet of lilies, she approaches the grave. With what reluctance does she leave the flowers there! Turning back, she hesitates. Then, in a flood of memories, the child comes running back—visible only to her—and they engage in a poignant tussle, the mother tenderly gathering in the spirit and releasing it, the tiny ghost abandoning her again and again.

Overwhelmed by her grief, Belilove is now prostrate, her face pressed against the cold stone floor. Yet this is not the end. Shedding her ashen veil, she traces circles in the air seeming to recover her balance. Then, turning away from us, she steps between the columns, arms raised like a winged Nike as she glories in her vision of the future.

This is, indeed, the dance of a great soul.