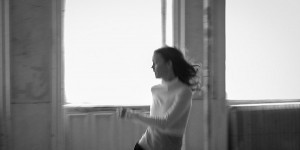 Creating a Partnership Amongst the Rubble

Though there is just one dancer in this is an Irish dance, the work is really a duet between choreographer Jean Butler and composer Neil Martin. The two share the stage for the duration of the piece: Butler dances while Martin plays the cello. Even when they aren’t locked into one another’s gaze, the musician and dancer are wholly connected, the space between them full of intention.

Butler and Martin’s relationship is one of the most satisfying aspects of the work. Their connection is intense but slippery. Sometimes, it manifests as a confrontation, other times a game, or a seduction.

The set, designed by Frank Conway, casts Butler and Martin into a mythical world all their own. Jagged white slabs, like giant pieces of scattered paper or the rubble from a collapsed ceiling, pile on the St. Mark’s altar. These slabs descend down two sides of the stage, framing the performance space. A white bench rests in front of the altar, and farther downstage sit two white cubes. Butler and Martin appear engaged in some sort of secret conversation within the aftermath of a disaster, or inside an ancient ruin.

Butler achieved fame when she co-created and starred in Riverdance. For the last decade, she has been working in a contemporary context. As a mover, she mesmerizes. Her presentation is casual, yet every action seems carefully considered and fully realized. She shifts effortlessly between lightning-fast and relaxed paces. Butler fascinates with even the most minute articulations. She consumes space, traveling large distances using small, contained footwork.

Though Butler is beautiful to watch, and her interactions with Martin gratifying, the dance does not always command our attention. Perhaps it’s the very intensity of the performers’ connection that creates this occasional feeling of stagnation. Maybe their communication is so personal that it isolates them. From the outside, its import is not always visible.

Butler’s program notes indicate that the movement and music in this is an Irish dance were created simultaneously through improvisation. She further explains music is in the “very essence” of Irish dance: steps would not exist without it. But while the musician and dancer are clearly interdependent, they retain their agency in her work. Indeed, their personal relationship comes across more than any connection between the music and dance.

The back-and-forth between Butler and Martin reaches an understated crescendo when Butler briefly takes Martin’s cello from him and then taps the strings to generate muted sounds as he strides a few paces away. In short order, she gives it back, gently, so that he can play again. This moment of reversal and vulnerability is at once simple and monumental, a satisfying reminder of the depths we cannot see.