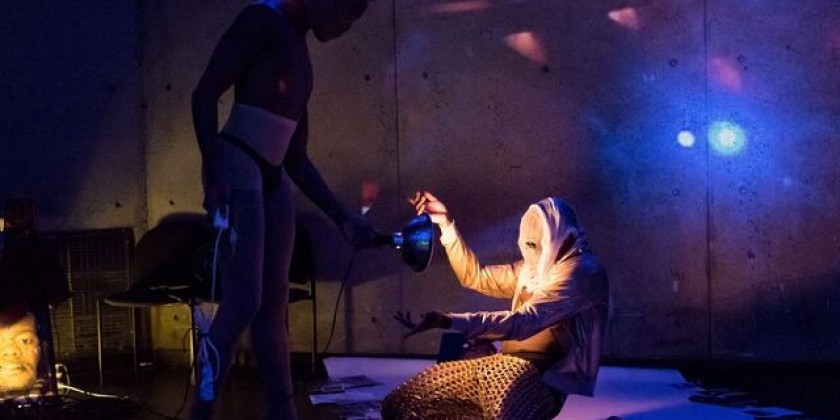 Inhaling the scent of burning incense sweetens the experience of watching #negrophobia, the performance piece that Jaamil Olawale Kosoko brought to the Underground Theater at the Abrons Art Center, on January 10, as part of the American Realness festival. The pleasing aroma doesn’t erase the savagery of American life — videos of police beating and killing people play continuously on the wall, at the edge of our consciousness as we watch the action in the center of the room. Yet patchouli has a calming effect. No one is going to die. Not here. Not now.

Kosoko has a message to deliver, but he understands that for anyone to hear him we all need to stop and take a breath. Maybe listen to some poetry and let our thoughts steep quietly. #negrophobia tries to strike a careful balance between fear, anger and seduction, offering a mix of gentle suggestions and theatrical power-plays.

Jam-packed with information, from a Ku Klux Klan hymn to an essay by James Baldwin, the piece takes a scholarly approach to dissecting racism. Yet it also tries to brighten and “re-decorate” this gloomy subject using a grab-bag of costumes and techniques. These resources accumulate until, by the end, they overshadow #negrophobia’s plea for understanding.

Two paths form a giant X on the floor marking the spot where the action will culminate, suggesting a target or a crossroads. This floorplan divides the seating area into wedges, with everyone facing inward, and at various points along the periphery the artist has set up stations that act as focal points. A table laden with books and mementos stands at the far side of the room, while on the other side another station supports a TV set. The artist reads poetry from an elevated platform with microphones, but this complicated space also includes the balcony above the seating area and “backstage” corridors where we can spy on Kosoko as if a surveillance camera were monitoring him. Photographs and magazine clippings fringe the central crossing, and the whole place is cluttered with props and reading material.

The audience also appears “on screen” at times. Stalking around the space in high heels is Kosoko’s collaborator, the self-described model and night-life personality IMMA/MESS, who captures our puzzled and stricken expressions with his digital phone. We are all implicated in this scenario, a theater-in-the-round from which there is no obvious escape. Adding to the viewer’s frustration, #negrophobia has no remedies to propose.

Curiously IMMA/MESS wears a nylon stocking over his head, with facial features painted on. While cameras are everywhere today and civilians armed with digital phones expose misdeeds that have long taken place out of sight, racist attitudes still assign masks to certain people. The model (let’s just call him “Imma” from now on) doesn’t show us his real face, but this leggy beauty shows a lot of skin, all of it brown; and in a society where people’s perceptions of one another are often influenced by flesh tones, his identity as an individual might remain a secret even if his face were visible. With his features hidden and his body exposed, however, Imma’s skin may become the object of a fetish or an obsession. The masked model is #negrophobia’s most effective prop. We never learn his real name.

Kosoko makes his first appearance rambling down an off-stage corridor, establishing himself as an outsider. Once in our shared space, he settles on a stool behind a microphone. He introduces himself as someone who has traded the “womb to prison” pipeline for the “womb to performance” pipeline, and congratulates himself on having made it out alive. Yet the womb is still a delicate matter, and his poem about motherhood evokes scenes that are bitter as well as comforting. Kosoko’s feelings about Santa Claus are less ambivalent. Clearly he mistrusts this old, white guy who supposedly rewards black children for good behavior. We have already heard a recorded radio broadcast in which panelists discuss the destruction of black fathers and the consequences of their absence. “I come from a long line of disappeared black men and mentally sick black women,” Kosoko declares.

Descending from the platform, Kosoko engages in a cat-and-mouse duet with the sensual Imma, who assumes submissive postures. They take turns wielding a riding crop that caresses or delivers sharp taps, and stands in for a dangling phallus. Provocatively Kosoko suggests that race relations are mixed up with sexual urges that make some people want to dominate others, while another group yearns to be dominated. If you happen to wind up among the submissives, without having elected to be there…..that’s a problem we can label “oppression” and “injustice.”

With its masks and mysteries #negrophobia also suggests a ritual designed to cleanse souls, if not society. Donning a horse mask, Imma might be a Santería devotee “mounted” by his god, but then Kosoko protests, “I’m a Saggitarius!” In any event, Kosoko is the one making a journey, crawling on all fours with his shirt pulled over his head and blindly pounding out an answer when Imma stamps his feet. Kosoko describes his portrait of motherhood as a “litany,” and in a later segment where he repeats the words, “These are my dead brother’s shoes,” the phrase seems solemn and incantatory. Will the ritual work, as planned?

During the course of the performance Kosoko changes costume several times, transforming himself and trying on various identities. He takes a swing with an imaginary baseball bat, gives a military salute, prays and boxes the air. At one point he reels-in a basketball that is attached to his foot by a long, white chain. Sitting on the floor and surrounding himself with books, he recommends a bibliography of works from the poems of Rumi to Brenda Dixon Gottschild’s “The Black Dancing Body,” but the tension rises as he describes lynching as “ritualized, sexualized cannibalism,” and Kosoko becomes so angry and disgusted that he has to leave the scene. #negrophobia is not a piece about despair, however, so he will be back.

In the final episode, an audience member is recruited to read aloud from Baldwin’s essay “On Being White and Other Lies,” while Kosoko works himself into a froth. By now he has crowned himself with a cobra-headed diadem à la Cleopatra, and as he rocks back and forth he tears at a voluminous robe of bronze-colored ribbons. Kosoko’s head literally smokes during this operation; and he foams at the mouth. It’s like watching a rocket launch at Cape Canaveral, but despite mighty efforts the performance artist never quite lifts off.

What are we to make of this? Kosoko wants us to share his pain, his insights and his exaltation, but he seems weighted down — not just by a genocidal history, but by an avalanche of images, texts, fabrics and cultural references that threaten to smother us.  One could spend a lifetime picking through the shards of #negrophobia. All we have is a single afternoon.