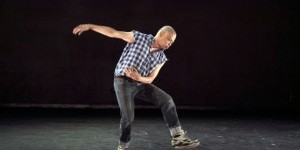 By Catherine Tharin
View Profile | More From This Author

Published on May 18, 2022
Eiko Otake with Ishmael Houston Jones; photo by Bonnie Brooks

The Duet Project: Distance is Malleable opens with a film: Japanese choreographer Eiko Otake is lying belly down on a granite slab high above a rushing river. A length of frayed red fabric streams on top of the granite nearby. (This very fabric, the inner lining of her grandmother’s kimono, has accompanied Eiko on most of her artistic journeys beginning with A Body in Fukushima in 2014 and can be seen in the overarching series A Body in Places.)

From her celluloid perch, Otake, known artistically as Eiko, watches as a gray-bearded man, the choreographer and performer, Ishmael Houston-Jones, unfurls the same red cloth we’ve noticed in the film, onto the stage. Houston-Jones moves deliberately as if measuring the distance and duration between them.

Pillars of the downtown dance community and friends for decades, Eiko and Houston-Jones, take unhurried stock of one another. “Are you okay?” they seem to ask. Later, slipping from the stage into the audience, and perched upside down on a chair, Eiko wonders how it happened — growing old, that is.

“I’ve run out of energy. Can I be with you when I die? Are you ready?” The two artists question each other from opposite aisles in the house, across the theater-goers.  “Do you want to plan it? Let me know when. Have you seen a person die? No, never.”

On this sojourn, Eiko weighs the time she and her companion have left and considers the lives of those friends and family who have passed. She is counting down.

Together with Takashi Otake, her partner of 40 years in Eiko & Koma,  work often expressed the delicacy of life, and examined the slow, relentless march of time. Elegy (1984), Lament (1985), Wind (1993), Death Poem (2005), and Mourning (2007) were all dances about death. Even White Dance: Moth (1976) includes the line, “To live is to be fragile.” Eiko’s solo work also accumulates slowly, moving watchers from reality to ineffable dimensions. Her aesthetic seeps into our consciousness, changing us.

Eiko Otake with Margaret Leng Tan at the Cathedral of St. John the Divine; photo by William Johnston

The Duet Project: Distance is Malleable is straight-forward rather than impressionistic. A dynamic bond between Eiko and her partners develops during a handful of dramatic scenes. Whether it's with long-time collaborator and avant-garde pianist Margaret Leng Tan, who plucks the interior strings of a baby grand; trans poet Iris McCloughlan, who scribes spur-of-the-moment messages on squares of white paper; or Houston-Jones, who tenderly lifts, carries, and lays Eiko down as if he were laying Jesus in the tomb, a distinct emotional resonance is palpable each time.

Eiko Otake with DonChristian Jones in Distance is Malleable; photo by Ben McKeown

When she first enters the stage barelegged and wearing two raincoats, a black one, over a tan, Eiko explains to the audience that these were given to her by the wife of a close friend, now deceased. Taking off the black raincoat, she hands it to young, multi-media artist/musician DonChristian Jones, who tenderly holds it in his arms. Eiko and Jones, who often work together, sensuously nuzzle.

Picking up a span of black fabric, Eiko compacts it, then furiously slams it to the floor again and again. Silently, she mouths a scream that sends the couple off, running laps around one another as if pursued by the Grim Reaper.

“Working with you makes me know I want to die before you,” Eiko gasps, out of breath.  "This is the order. I don’t want to break it.”

Eiko’s body, thin and wiry, moves with tense halting gestures. Crimped movements, jutting angled elbows and spikey fingers pierce the air. Her movement choices, originating from Butoh and Noh drama, are familiar to those who have followed her career.

Eiko Otake with a picture of her mother; photo by Ben McKeown

In a haunting funereal film, which concludes the evening, moths flutter and land on Eiko’s face and upper body. A bouquet of white hydrangeas is caressed and consumed. In both the film and on stage, Eiko flails herself with hydrangea stems — an effort to heighten the sting of living — as their blossoms drop one by one.

By the very end, the stage, littered with petals and paper, resembles the mess, the unanswered questions, and the bonds broken when we die. But, this impassioned and poignant piece is also about living and endeavoring to make the most of it, moment by moment, in compressed, fleeting time.