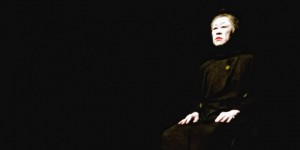 Impressions of "Costume En Face: A Primer of Darkness for Young Boys and Girls"

A Screening and Panel Discussion at The Kitchen

Most of us can visualize “a person cutting grass.” But what does “brain drool” look like? And can we form an image of the “stagnation of one hundred demons”? That’s a lot of demons to ask the mind to grasp.

The late Japanese choreographer Tatsumi Hijikata, however, labeled some of his movements with verbal tags like these. Like many choreographers today, Hijikata used these tags as prompts and short-hand in communicating with his dancers; but he also employed fantastic descriptions like “a silver needle person” to recall external images or ideas that had inspired him and to stimulate the dancers’ creativity in performance. The nicknames Hijikata gave to certain movements were exceeded in their strangeness only by the dances themselves, as he developed a new form of modern dance he called Ankoku Butoh (“the dance of darkness”).

According to Takashi Morishita, director of the Hijikata Archive at Keio University in Japan, during a period of intense creativity, from 1974 to 1976, the choreographer generated a profusion of such nicknames and suggestive phrases that he made his dancers copy into notebooks. This “notational” aspect of his practice came under scrutiny on January 9, when The Kitchen hosted a film screening and panel discussion dedicated to the topic. The event recalled the publication last year, in Japanese and English, of the notebook dancer Moe Yamamoto kept to document Hijikata’s piece Costume En Face (Shonen no isho), which had its premiere at the Asbestos-studio in 1976. Ugly Duckling Presse published the notebook, titled “Costume En Face: A Primer of Darkness for Young Boys and Girls,” as part of a series called “Emergency Playscripts” including an essay by Morishita.

Thank goodness there’s a film. The cryptic notes in this script for Costume En Face tickle the imagination and make a fascinating study, but they acquire a specific intention only within the context of Hijikata’s active work in the studio. They illuminate his process more than they map his creation; and only participants in the original production would be able to use these notes as a guide to recreate the dance’s movements. For the uninitiated, reading them is like staring at hieroglyphics and trying to decipher them. The writing beckons to us inviting us to recreate the poetry of a vanished people from our own atavistic impulses and buried knowledge. Leaving such voluptuous “instructions” for posterity seems like a very Hijikata thing to do.

The film — in reality a 15-minute excerpt showing what appears to be the dance’s conclusion — features Yamamoto dancing solo at first. Strikingly handsome in an androgynous way, he wears a long-sleeved robe that softens and stylizes the movements of his body while emphasizing the gestures of his hands and the expressions on his face. Both hands and face are chalk-white, and even in stillness they draw attention away from the slow bending of the body.

Scarcely traveling, Yamamoto dances before a featureless plaque that reflects the sheen of stage lights or becomes the abode of shadows. On the film, at least, this environment seems composed of light and dissociated from our earthly plane. An electronic synthesizer supplies flashes of sound, eerie chords and burbling noises worthy of a space opera.

Though he had only been dancing with Hijikata for two years when the film was made, Yamamoto displays remarkable control. His hands rest in position, the fingers sleeping yet also clearly alive and sentient. It is hard to imagine these subtle hands having the strength to grasp a tool. Meanwhile, Yamamoto’s mouth assumes a variety of hollow shapes. Although we can see the effort involved, he doesn’t express any urgency. These mouth positions look exploratory as if the dancer were learning to make new sounds. At one point, his whole head pulls alarmingly to one side stretching his skin and straining the muscles of his neck.  Noticing something below his plane of vision Yamamoto hunkers down to investigate shuffling forward inquisitively in a crouch. Standing again he revolves around himself, wagging his derrière with a gentle and distinctly feminine hip-roll. The lights dim, and Yamamoto subsides with ineffable grace, like a time-lapse film of a flower blooming in reverse. When his features relax he assumes a beatific expression, his eyes half-closed and his mouth round and childlike. His expression suggests wonder. Then shadowy figures in a variety of costumes emerge to flank him forming a tableau. They sink and rise together; and eventually the curtain rings down to applause.

Where is the “rhinoceros” that keeps popping up in the notes? The panelists who discuss these matters after the screening don’t know, either.

Panelist Annie B. Parson. Photo courtesy of The Kitchen.

For visual artist Aki Sasamoto, Hijikata’s works are “devoid of understanding,” but she appreciates their rhythms. She finds it significant that Yamamoto’s Japanese notations contain two kinds of syllabic characters, katakana and hiragana, in equal measure; and says Hijikata’s choice of vocabularies gives insight into his technique. She adds that Hijikata was a master of Minimalism, using repetition and layering to maximum effect.

Butoh scholar Bruce Baird, who has interviewed several of Hijikata’s dancers for a forthcoming book, speaks of the collision of images evident in Yamamoto’s notes. Different images may co-exist simultaneously on stage, and dancers may be instructed to keep a certain image in mind for the duration of a performance. Baird describes Hijikata’s dancers as “scared shitless” and suffering from information overload as the master pelted them with images and ideas in the studio.

Moderator Yelena Gluzman, an editor at Ugly Duckling Presse, says the language of the notebooks resists rational analysis and is filled with internal contradictions. One of Hijikata’s goals was to overcome the division between internal and external experience, she says; and the choreographer believed in ghosts. He believed the ghost of his dead sister, for instance, inhabited one of his legs disabling part of his body.

Yelena Gluzman and Paul Lazar. Photo courtesy of The Kitchen.

While Hijikata’s arcane record of his work with imagery makes it impossible for outsiders to reconstruct his dances from the notes alone, this doesn’t mean that other choreographers cannot profit from these materials. Choreographer Annie-B Parson and Paul Lazar, who co-direct Big Dance Theater, were on hand to discuss their use of Page 79 of Yamamoto’s notes in Resplendent Shimmering Topaz Waterfall, a duet they created in homage to Hijikata and included in that evening’s performance of "Big Dance: Short Form” at The Kitchen.

Parson expresses admiration for Yamamoto’s technique, noting the special “muscularity” and sensitivity of his body which she describes as being in “a reactive state.” Yet she also declares the film of Costume En Face is “hard to watch, because it’s so profound.”  She says her own approach to choreography, in contrast, focuses on the surfaces of things. As a result, the opacity of Yamamoto’s notes actually makes things easier for Parson, as she can interpret them literally without concerning herself with deeper meanings or with Hijikata’s intentions. In the same way, she says, in the past she has drawn inspiration from MapQuest directions and from the assembly instructions that accompany pieces of furniture from IKEA.

Parson finds it “very important not to be too respectful” of her sources, she says, while emphasizing that she takes Hijikata’s work seriously. Her own work is informed by research and by her past experience dancing with a Korean dance company. She is “not a novice” when it comes to Butoh, she says; and Lazar adds that the new movements inspired by Yamamoto’s notes acquired an “unplanned resonance” as Big Dance Theater’s work on Resplendent Shimmering Topaz Waterfall proceeded. The collaborators claim they did not watch the film of Costume En Face before making their piece, although when seeing Topaz Waterfall performed later certain points where the two dances seem to intersect (one of Lazar’s hand gestures and the way he revolves around himself) made this avowal a little hard to swallow. In most respects, the dances are quite different.

The publication of Yamamoto’s notes for Costume En Face adds an original and provocative dimension to the current debate over how modern dances can be preserved. Hijikata’s imagistic “Butoh-fu” notes make quite a contrast not only with Labanotation but also with the “dance capsules” devised by the Cunningham Dance Foundation, and with the “exploded view diagrams” that Twyla Tharp claims to be developing to save her works.

The film of Costume En Face is also a treasure, documenting a time of extraordinary ferment in the life of dance and attesting to Yamamoto’s exquisite talent as a performer. Yamamoto now directs his own Kanazawa Butoh Kan; and it would be fascinating to see what they are up to.