DAY IN THE LIFE OF DANCE: David Parker of The Bang Group on Scrambling Musical Theatre, Male Intimacy, and His Company as Family

DIG Dance at 92Y Harkness Dance Center presents The Bang Group: Under the Skin-Redux and Aileen Passloff-Stepping Forward: one foot (in front of the other) 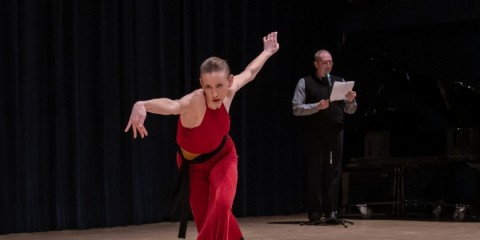 Objects and Lessons Learned (scribbled after the performances)

Enthusiastically, is the bite in the rhythm.

Generosity— not the first quality usually discussed by historians when speaking of great artists or important artistic movements — was front and center this weekend at the 92Y. In a feast of exquisite dancing, gem-like choreography, and rich musicality, both The Bang Group and the dancing, musical friends of Aileen Passloff celebrated Passloff’s legacy of generosity as teacher, director, actor, and creative phenom. She has been a ballet dancer, considered avant-garde, a pioneer of the Judson Dance Theater, a Fulbright Scholar and, and, and, and . . . She says all kinds of good dancing interest her.

The 87-year-old Passloff premiered three new pieces and older repertory alongside works from James Waring and Remy Charlip. David Parker shared his witty, noisy, rhythmic dances from 2004 to 2017, including works by Waring and Passloff, whom he acknowledges as artistic parents — sources of strength and inspiration.

Passloff taught Parker at Bard College for two of her 46 years there. (He is one of the hundreds of today’s working artists she’s influenced.) Waring, who died at age 53 in 1975, was Passloff’s great friend and artistic mentor. Like Parker he couldn’t easily be tied to a single genre. In the family of Passloff, Waring, and Parker, we meet artists whose works don’t necessarily look like one another’s, but who reflect an open, adventurous, “why not?” attitude coupled with respect for form.

Yes, Rachmaninoff can stomp as well as sweep Parker shows us in Enough (2004). In the center of swelling romanticism, dancers might get caught upside down, legs inelegantly grabbing their partner’s heads. Sexuality is in the mix. How long can Jeffrey Kazin lock lips with Tommy Siebold as the two wind around one another, moving from the floor to their feet? Then comes their ardent three-way smooch with Amber Sloan. And what about the stunning red designer dresses that everyone, regardless of gender, wears? Parker, not one to hammer any idea over our heads, states himself with craft and humor, bringing the unexpected out to play.

The Bang Group’s dancers — versatile, capable, gorgeous — perform with flair across dance styles. Caleb Teicher, who joins the group in Settling Scores (2017), fits right in. He is marvelous as he tosses off a tap dance while singing “Da, da, di, da, da” to Mozart’s Rondo a la Turka, gleefully (sometimes boisterously) jamming through Parker’s Song & Dance (2017) as if alone in the shower.

In my scribbles during the evening, I misquoted something Parker read in the recreation of Waring’s 12 Objects from Tender Buttons (1972). In this dance, as Parker reads excerpts from Gertrude Stein’s modernist word poems, Sloan swims along, runs through, and stops to listen or play patty-cake with them. (The words and phrases in themselves dance like abstract choreography.) “Enthusiastically is the bite in the rhythm,” was a phrase I heard inaccurately. It was, “Enthusiastically so is the bite in the ribbon.” I’d like to think it was a happy accident that I jotted the wrong words down. They so perfectly describe the experience of Parker’s work.

Two film excerpts by Marta Renzi introduce us to Passloff. Arthur and Aileen, documents the elder artist coaching Arthur Aviles from a comfy black leather recliner —doggie on lap — as the almost-naked man springs off and falls onto her living room floor. Art and life are one, and connections of dancer to dance maker are treasured. Her Magnum Opus shows Passloff as a magical earth mother, using her hands and arms to create choreography on a wooden kitchen table, and inspiring people sitting on her lawn to transform into moving, magical characters.

Octandre, created by Waring for Passloff in I958, is a highlight of both programs. This sixty-year-old dance still speaks eloquently. Nic Petry of the Bang Group reveals a multi-textured landscape on the empty stage. In a wholehearted and sensitive performance, he holds our attention, shifting our interest and appreciation of his imagined world with each attentive articulation of his body.

Whether premieres or older dances, the works of Passloff, like perfectly crafted short stories, transport us. We visit thoughtful, fanciful, even surreal places and are carried away, then returned, stirred.

Frolic, a premiere, danced to Eric Satie’s Trois Morceau En La Form De La Pera, introduces us to the antics of a preening ballerina (Esme Boyce), a barking joker (Aviles) — who dares to grab attention from her — a fun-loving, flute-playing mother (Charlotte Hendrickson), and an animated horse trainer (Pam Wess), with her two amusing, performing horses (Asher Gelman and Matti Gelman). The collection of figures remind me of Alexander Calder’s Circus turned human, brought to life in order to sing us happy nonsense poems.

Heads Together Whispering (2014), a poignant duet for Aviles and Hendrickson, finds the two riveting artists in a jovial, impassioned, secret conversation and then a not-so-secret chat in which they devotedly dance while spelling out each other’s names. Wrapping around, falling and catching each other, their relationship veers from childlike, sweet and untroubled, to a connection of a deeper more somber nature. Performed to Giovanni Battista Pergolesi’s heartrending Stabat Mater, the dance, like its sacred music, holds love and pain tightly together.

Aviles and Hendrickson, who figure prominently in Passloff’s work, radiate in every piece. Aviles’ spry exuberance and Hendrick’s precision, deceptively soft and lush, entice us. The other performers are also excellent. And, the live music during both The Bang Group’s and Passloff’s performances . . . to be on such intimate terms with the talents of Michael Scales, Michael Cherry, Douglas Schultz, and Arturo Martinez was a rare treat.

In a panel conversation after the weekend’s performances, Passloff calls her many students her children, saying that she has had so many of them over the years, she feels like “the old woman who lives in the shoe” (who has so many children, she didn’t know what to do). Except, as we’ve seen, she knows exactly.