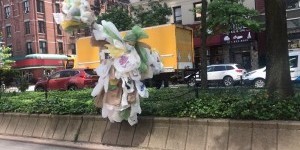 A heap of plastic bags is a common sight on the streets of New York, where the trash overflows every weekend.  But buried in these heaps last Saturday were human beings — dancing for their lives.

Jody Sperling’s Plastic Harvest is a folk dance for the 21st Century, the city dump instead of the village green.  It’s becoming a ritual on Manhattan streets, adapted to individual blocks. Three women (Anika Hunter, Maki Kitahara, and Andrea Trager) enter in billowing costumes made of hundreds of plastic bags, which they shake, spin and swirl as they process up the block. Dancing to a sound-score of ominous inhuman noises, they scatter the audience with mock-ferocious charges, then visually vandalize the local architecture.

On Amsterdam Avenue between 109th and 110th, they stomped over the seats of a bus shelter, then flopped and flattened themselves against the wall of a Con Edison substation — a weird, windowless art deco building that looks like a backdrop for Batman.

The dance dramatizes not just the ubiquity of plastic bags, but also our comfort with them. Seduced by the convenience of a throwaway culture, it’s hard to break our dependence on these weightless wonders.

What’s at stake was brought out in a breathtaking performance by Sperling herself, channeling modern-dance pioneer Loie Fuller. Swathed in silky fabric with leaf-like patterns, her reach extended by hidden poles, she became a tree shaken and tossed by the wind, then picked up and spun as if in a tornado. This American Elm (an excerpt from Sperling’s Arboreal Entanglement) was tangled up in this year’s super-destructive hurricanes and fires – and the certainty of worse to come.

Finally on the program was a sidewalk recital by a young ballet dancer who looked like Degas’s “Little Dancer” but seemed to have her arms and legs screwed on wrong. It was Maki Kitahara, lately a feral pile of plastic bags, now with a full-face mask on the back of her head, doing battements to the rear that looked like stiff leg-lifts to the front.  Whether “Bunhead’s Back” is a put-down of ballet culture or just sympathy for all the would-be ballerinas in the reject bin, depends on your attitude, I think. 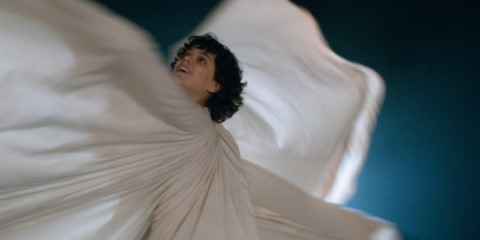 Impressions of: The Film "The Dancer" about Loie Fuller and Choreographed by Jody Sperling

THE DANCE ENTHUSIAST ASKS: Lori Belilove of the Isadora Duncan Dance Company about Dancing Joy and Duncan's Legacy in the 21st Century