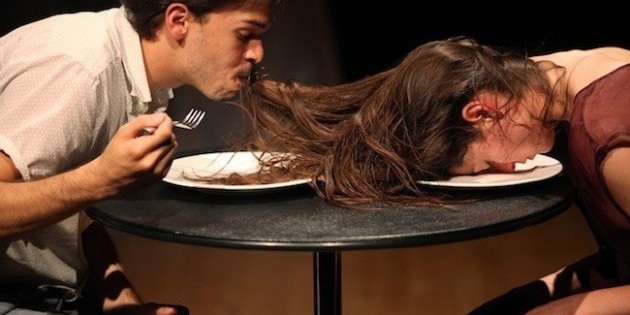 Deirdre Towers for The Dance Enthusiast

A man sits at the head of a long table talking to himself while the rest of his companions carry on with an intensity that seems to exclude him. What is their relationship to him? Why is he somehow not engaged? He (Octavio Campos, co-creator) is devilishly handsome and well dressed. Presumably, it is his party, his taste in music played delightfully on a piano by Fernando Landeros behind a curtain. Or, are we just privy to a private moment when he surrenders to the magnet of his own thoughts?

So curious is he, that it takes awhile to realize that the guests are not holding a gesture, they are just photos propped up on chairs. Three massive wind machines behind him suddenly blast away the decorum of the party; a stage crew sweeps off the evidence with graceful efficiency.

Campos now stands alone with a dress hanging in front of him. He ecstatically races in a circle, again and again. We are left to our imagination. Is he conjuring up his displaced femininity? Is he recalling a time when he was completely gender free?

And so a rhythm for DINING ALONE is set up. An image is presented – as a magician would take off his top hat - and then Herrera lets the audience pull the rabbit(s) out. She seems less interested in giving us the kinetic rush of dance or the emotional tension of theater, than in goading us to play along with her.

Choreographer/director Rosie Herrera graduated from New World School and has been commissioned by The Miami Light Project in association with the Adrienne Arsht Center for the Performing and the American Dance Festival.

As a rehearsal director, co- choreographer and performer, Herrera was in residency at the Chat Noir Cabaret in Miami Beach with the interdisciplinary performance ensemble Circ X. She now has the blessing of having not one, but three stage mothers, eagerly pushing for her success. John Richard, President of the prestigious Arsht Center, the home of the Miami Ballet, and Vice President, Scott Shiller, along with various board members, attended the April 19th program at BAC and coddled her with a chic reception.

The after affect of her DINING ALONE is that Herrera is on to something fun, romantic and rich, which she herself may be reluctant to define yet - or to rein in. Have plates ever been rolled with such precision in a dance? No, but need plates be the virtuosos of her show? Her cast is thoroughly engaged, some, such as Campos, quite magnificent. The Arsht Center wakes us up to acknowledge that South Florida is burbling with talent.