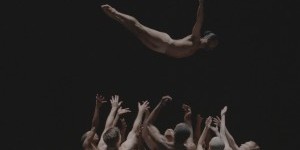 Highlights of the 46th Annual Dance On Camera Festival

The 46th Annual Dance on Camera Festival, breaking its tradition of presenting in frigid winter for a sticky summer season (either way, great to be inside at the movies), was book-ended by two fascinating documentaries that focused on the process of re-creating masterworks of dance. Can You Bring It: Bill T. Jones and D-Man in the Waters, a work-in-progress by Rosalynde LeBlanc and Tom Hurwitz, opened the festival, and If The Dancer Dances a film by Lise Friedman and Maia Wechsler, received its world premiere at the grande finale.

Dance re-creation — reconstruction, revival, whichever “r- word” you use — is always a puzzle.  How can a new cast of dancers inhabit a work of art from another time period? While the steps and positions can be replicated, the choreographers’ intentions and the original performers’ qualities (dynamics, timing) as well as the unique company spirit that made the masterpieces so breathtaking to begin with, are trickier to conjure up.

There is no app for this transmission. Videos, if they exist, are flat and imperfect. Labanotation, the written system for recording dance, is not understood by many artists. Great dances have always passed on as living stories from one body to another. The challenge to keep the integrity of the original and honor the efforts of those taking on the task to bring it back to life makes for captivating theater. At this year's festival both films held us rapt.

If The Dancer Dances, a film by Lise Friedman and Maia Wechsler, edited by Mary Manhardt

For those familiar with the dancers of Stephen Petronio’s stellar company, it is difficult to imagine they could be ruffled by any movement challenge. They perform complex sequences with such surety and speed, our eyes cross.

In the gorgeously shot and edited If the Dancer Dances, we follow the group as they learn Merce Cunningham’s quintessential 1968 RainForest (a groundbreaking collaboration with Andy Warhol’s set, Jasper Johns' costumes, and David Tudor’s sound score) from former members of the Merce Cunningham Dance Company.

Feeling the nervous energy as dancers walk in to the first day of rehearsal run by stagers, we’re reminded of kids on Day One at a new school. As the dancers valiantly attempt to master a completely new movement style, we appreciate their struggle. It’s surprising to hear Petronio, the cool leader of one of the most physically exciting contemporary dance companies in the world, reveal nervously, “We are all feeling our way…”

The company has only twelve days over three weeks to work with the stagers: can they make it? This is the thrilling question of the film.

Vintage footage and photos of Merce Cunningham and the original company, along with interviews of older casts and stagers, offer insight into Cunningham, his tremendous influence, and how times have changed.

Albert Reid describes a “sexual quality that pervades your skin’s surface,” and “a sense of weather” as the air moved Andy Warhol’s silver mylar pillows randomly around the choreography. Meg Harper and Sandra Neels remind us that, “The focus was on what you are doing, not on metaphor.” Still, when Gus Solomons,Jr. uses metaphor of water to describe a quality necessary to the movement, Petronio’s dancers seem relieved to have something to hang on to. Different times require different tools.

Speaking of different times, we realize through Solomons, that Cunningham, a leader of the avant-garde, only used traditional male/female couplings in his dances, and that even by 2015 and 2017 (when these reconstructions were filmed) Petronio Company’s Davalois Fearon was still the only Black professional woman dancer to ever have performed in RainForest.

Beginning and ending with heavy exhalations of dancers at work, If The Dancer Dances reveals the sensitivity, diligence, courage, and inevitable repetitive grind that’s required to revive masterpieces of dance. Of course, Cunningham and Petronio aficionados will love this film, but anyone who has ever been near a dance studio will be moved by the devotion of these great dancers to their art and its story.

Can You Bring It: Bill T. Jones and D-Man in the Waters, a work-in-progress by Rosalynde LeBlanc and Tom Hurwitz, edited by Ann Collins

Roz LeBlanc hopes her film collaboration with the brilliant cinematographer Tom Hurwitz, Can You Bring It: Bill T. Jones and D-Man in the Waters, will resonate with all populations, not just devotees of dance. When the project is completed in 2019 and featured on PBS (no doubt), she wants someone flipping channels to catch a glimpse and feel compelled to watch and re-watch. I predict she will get her wish and then some. Even in its incomplete form (my audience saw only two acts of three) the emotionally powerful story glues us to our chairs.

Centering around a 2016 re-creation of Bill T. Jones’ monumental D-Man in the Waters (1989), the documentary follows a company of young students at Loyola Marymount University struggling with the rigorous mental and physical demands of the choreography. “Think of yourselves as athletes,” their teacher/stager (also LeBlanc) reminds the somewhat worried group of fresh faces.

They giggle, they fall, they stress, they admirably plunge themselves into the experience. One young man, with no formal training other than a minimal exposure to hip hop, is cast in a central role, forcing LeBlanc to “give him some quick lessons in dance.” One has to admire the fearlessness of the students and their teacher.

As affecting as the story of students is, it is merely one fascinating aspect of this this multi-layered documentary. Absorbing interviews with Bill T. Jones and the original members of the Bill T. Jones/Arnie Zane Company fill us in on what it was like to create and perform alongside the AIDS epidemic in the 1980s. Even decades later, the memories —gripping and vivid — feel genuinely present tense. There was concern among the group that Jones wouldn’t be able to continue working without Arnie Zane, his partner in life and art. Zane died of AIDS in 1988, the year before D-Man premiered. “Can he live through The Joyce season?” Jones wondered at the time.

Bill T. Jones/Arnie Zane Company in D-Man in The Waters

Heidi Latsky, recalls that half of her phone book died. Jones talks about starting the company with Zane in 1978 saying that they wanted “to create a company that looked like the world we wanted to live in.” Seán Curran describes his first years with this “world”, as work being play and play being work, but “the community thing changed radically when it was about ‘how do we save ourselves?’ ”

Can You Bring It: Bill T. Jones and D-Man in the Waters : Loyola Marymount Students

The jubilant D-Man in the Waters with its game-like formations, ecstatic dives into floor and air, and supportive and joyous partnering relationships, was about survival. “Not dance for dances’ sake,” says Latsky. “It made sense out of a chaotic world. It was a way to go on.”

The Loyola students, born 10 years or so after D-Man premiered, can work on the steps, and gestures of the dance, but can they comprehend the reality of the era in which it was made? They admit (somewhat shockingly) AIDS is glossed over when it is discussed with them; the disease is something remote, unconnected, and separate from their world. “This won’t happen to me,” says one. How can they feel the urgency that drove the original company?

“Can you be moved?” Jones asks the students when he travels to Los Angeles to see his dance. He looks every young dancer in the eye, shakes each hand, gets every name, and learns what roles they will be dancing.  Coaching them, speaking about his experiences — one generation extending himself to another — Jones urges them to figure out what it is they will fight for. “Can you be bad M.F.ers? We need it. Bring It,” he charges.

Even in its rough-cut, in progress-version, Can You Bring It: Bill T. Jones and D-Man in the Waters is a feat of storytelling, skillfully weaving together the tale of the college students, the history of the original company, and magnificent footage of the present-day Bill T. Jones/Arnie Zane Company performing D-Man. The documentary fully embraces dance, while simultaneously transcending it. This is a piece about humanity, bravery, and hope.

HELP FUND the conclusion of Can You Bring It: Bill T. Jones and D-Man in the Waterswith a Tax-Deductible Donation.

The Dance Enthusiast Shares IMPRESSIONS/ our brand of review and Creates Conversation.
For more IMPRESSIONS, click here and to read our IMPRESSIONS of the Dance on Camera's Short Films, click here.
Share your #AudienceReview of performances for a chance to win a prize.