Pepper Fajans was working as a carpenter for the Merce Cunningham Dance Company when he was assigned the responsibility of caring for the aging Cunningham. After Cunningham passed away in 2009, Fajans started looking after David Vaughan, long-time archivist for Cunningham. Thus began an unlikely friendship.

Fajans and Vaughan, 31 and 92 respectively, founded Brooklyn Touring Outfit as a means of commemorating and continuing their relationship. Co.Venture, the pair’s first piece, uses storytelling, props, dance, and theater to relate their escapades. The work celebrates their intergenerational camaraderie and unexpected connection.

The “touring” part of Brooklyn Touring Outfit speaks to Fajans and Vaughan’s shared sense of adventure: Co.Venture is mobile, feeding their desire to travel. After premiering in Montreal in 2015, it debuted in the United States at the Baryshnikov Arts Center. 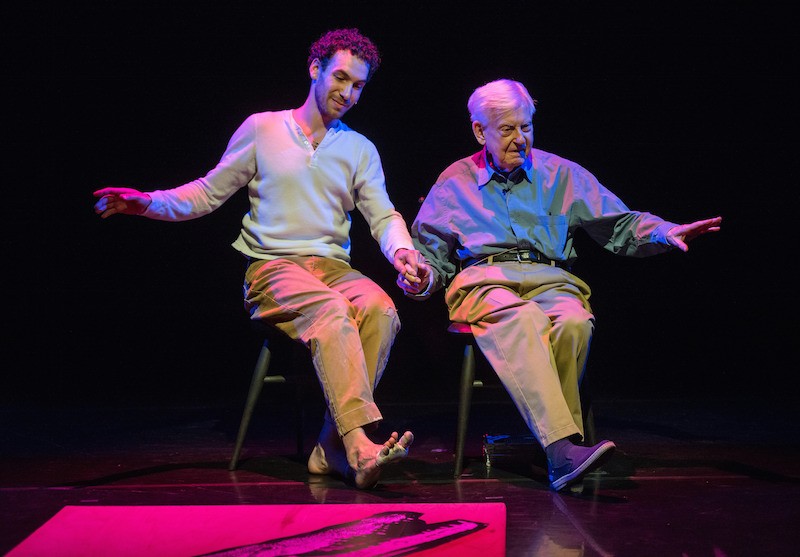 Fajans and Vaughan enter the stage hidden behind a seemingly large wooden slab that moves with them. Their hands slide around the sides of it tauntingly. Then the board topples forward. We gasp, anticipating a loud crash, but it lands lightly, apparently made of Styrofoam. The piece brims with cute tricks like this.

Next Vaughan sits in a chair holding a giant book, which diminishes his tiny frame. He reads the words of Cunningham: “You have to love dancing to stick to it. It gives you nothing back, no manuscripts to store away, no paintings to show on walls and maybe hang in museums, no poems to be printed and sold, nothing but that single fleeting moment when you feel alive.”

Co.Venture embraces this credo. Simple and earnest, the bulk of the work features Vaughan and Fajans recounting stories. The two speak naturally, swapping memories. Fajans is eager and youthful, while Vaughan speaks with the candor of someone who has lived many decades. The two men reflect on their travels, recounting what they ate, drank, and saw: gelato in Rome, Turkish coffee in Tel Aviv, a trip to the Caravaggio Museum again in Rome.

Fajans tells when Vaughan came close to falling while under his watch. “It was nerve-wracking . . . how vulnerable you were,” he says. As Fajans speaks, he balances a large board on his hand while executing Cunningham-esque lunges, demonstrating the fragility of an older person’s physical state. 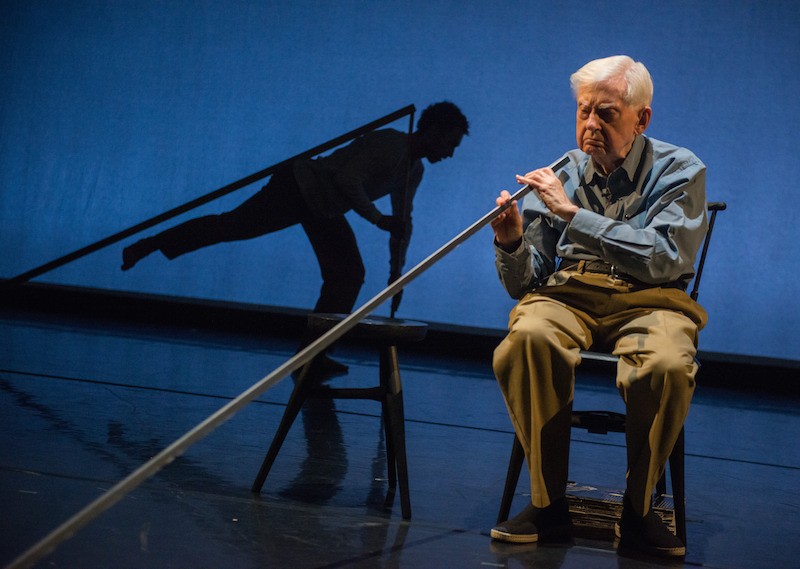 In the dance world where beautiful bodies are expected, it shocks and, even more so, stimulates to see someone onstage so far past his physical prime as Vaughan is. The work inspires contemplation on what it means to grow old, to be vulnerable, to surrender control, and to depend on someone else.

The men dance together touchingly. Fajans sweeps the stage in broad, angular movements, which Vaughan, seated, echoes in tiny gestures with his hands — an endearing counterpoint that would make Cunningham proud.

Moments of slapstick humor punch up the stories. Fajans drags out a crude painting of Merce Cunningham in a black unitard and a crocodile mask. Later, large cutouts of Cunningham’s balletically shaped hand and beveled foot are mounted on red poles and used as props, which Fajans glides around the stage, along with puppets of both Vaughan and Fajans’ heads.

Whether intentional or not, the work serves as an homage to Merce Cunningham, the force connecting the two men. The friendship between Fajans and Vaughan reveals the mutual care in the community surrounding Cunningham's work, a group of artists dedicated fixedly to their craft, but — maybe more importantly — to one another.

The Dance Enthusiast Shares IMPRESSIONS/ our brand of review and Creates Conversation.
Check out our other IMPRESSIONS here.
Share your #AudienceReview of this show or others for a chance to win a limited edition of Jordan Matter's book Dancers After Dark