Curated by Ishmael Houston-Jones & Will Rawls

Danspace's Platforms 2016: Lost & Found celebrates artists in the dance community who were lost and/or impacted by HIV/AIDS. This, the eleventh edition of Danspace Project's Platform series, continues to connect artists across generations to remember gone, but not forgotten, muses and mentors.

In response to the disproportionate US coverage of the AIDS epidemic in the early 1980s, curators Ishmael Houston-Jones and Will Rawls, move beyond the gay, white male community to include bisexual, transgender, female African American and Latina artists. This series includes over 80 artists and 28 events throughout New York City during October and November.

As a witness and participant this year (skeleton architecture, or the future of our worlds) I can speak to the profound sense of groundedness this series cultivates. I feel closer to my dance community — past and present. I'm grateful that our dance elders seek to preserve, gather, and celebrate the legacies of artists who are often hidden on the fringes of dance history. This feels necessary. This feels important. -Melanie Greene 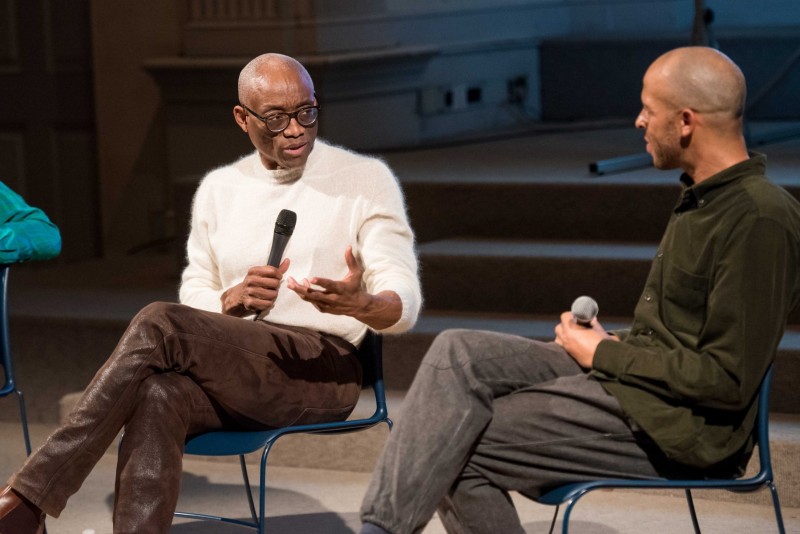 An Evening with Bill T. Jones

Curators Ishmael Houston-Jones & Will Rawls sat down with Bill T. Jones to watch and discuss his trilogy Monkey Run Road (1979), Blauvelt Mountain (1979), and a study for Valley Cottage (1980). These pieces were choreographed and performed by Jones and his partner on and off the stage, Arnie Zane. After viewing each piece, this impressive trio discussed the works, and later opened the conversation to the audience for questions.

Each duet is strategically crafted and virtuosic in a nostalgic post-modern minimalistic way. Zane’s incorporation of his visual arts training offers an exciting blend of yin and yang for the stunning compositions, and his presentational, serious approach complements Jones’ subversive and commanding playfulness.

Jones is a tall black man and Zane, a petite white Jewish man. Their intimate, interracial male partnering was not common during the late 1970s, and static from the public and press arose. Critics labeled their work homosexual or homoerotic dance. Others focused on race by strategically talking around it. “Jones’ is so good-looking, he moves with animal power, but who's that little malignant frog?*”

Zane died in 1988 from AIDS-related lymphoma. “I’m the remaining survivor of a celebrated interracial homosexual duet company,” Jones said. The Bill T. Jones/Arnie Zane Dance Company acts as the living memorial of what they had been . . . their offspring. Although Jones didn’t think their duets could breath again, dance critic Deborah Jowitt encouraged him to get out of the way of the work. Periodically, the company returns to the trilogy works, and Zane’s memory lives on through them.

*Quote from: Thirteen Ways of Looking at a Black Man By Henry Louis Gates, Jr. 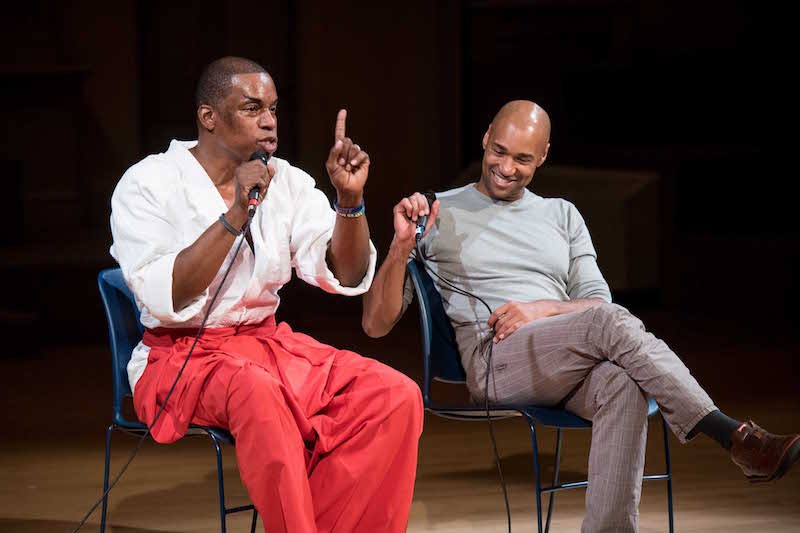 An Evening with Archie Burnett: Celebrating the Legacy of Willi Ninja

Voguing emerged from the Harlem ballroom scene in the 1980s. Ninja (April 12, 1961 – September 2, 2006) and longtime friend Archie Burnett began voguing by turning pictures and poses from magazines into 3D movement. Chinese martial arts films from the 1970s also inspired them. They would watch these movies at Ninja’s mom’s house on Saturday mornings and replicate the moves. “Voguing is a way to bring the inner spirit out to let people enjoy,” Burnett said. Ninja and Burnett are the fathers of House of Ninja. Houses are an important component of the voguing scene and operate as an extended social family and dance group.

Following compiled video clips from Sally Sommer’s Check Your Body at the Door, Malcolm McClaren’s Deep in Vogue, Diane Martel’s House of Tres, and Jennie Livingston’s Paris is Burning, the evening continued with a Chinese martial arts-themed performance, East Meets West. Dubbed English voiceovers were paired with performers’ out of sync lips. A vogue battle ensued with six dancers facing off two at a time. House dance also made an appearance with fancy footwork and head spinning. Vogue superstar Javier Ninja took center stage contorting his arms and sliding seamlessly into splits while to music recites, “How do I look?” It’s a celebration of talent and the fierce.

Next, Immersion of Vogue choreographed by Slim Ninja (Jason A. Rodriguez) took the floor with members from several houses including House of Ninja, House of Amazon, House of LaBeija, House of De La Blanca, House of Khan, and House of Mizrahi. Designed to illustrate that houses can overcome competitiveness and work together, this piece parades catwalks, duckwalks, intricate footwork, and poses to accentuate flexibility and form.

Later Burnett and artist Darrell Jones reminisced during a talkback discussion. “You get your name on the dance floor. You put in the time. The club was the classroom,” Burnett explained. When asked how young artists can learn today, Burnett added that you’ve got to be in the room. You can’t simply learn from TV or the Internet. There are no short cuts.

Ninja died in 2006 from AIDs related heart failure, but House of Ninja remains steadfast in his values and commitment to one’s dance family. 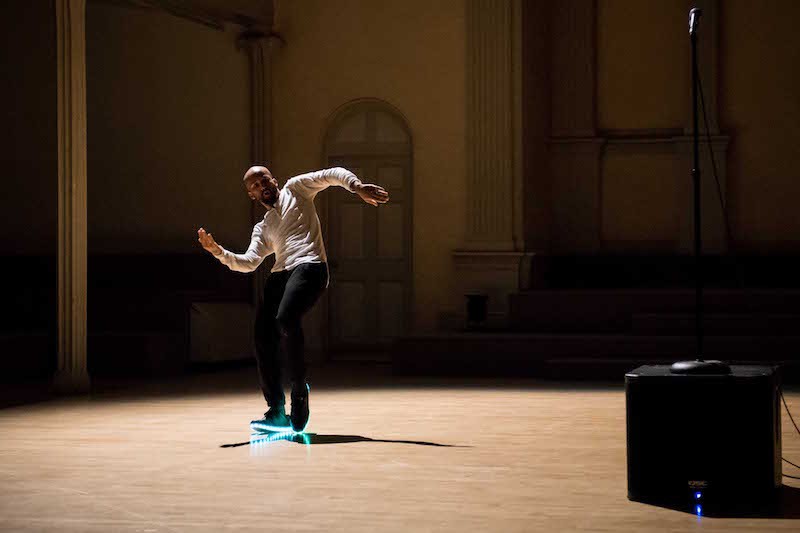 Ni’Ja Whitson’s Someone Will Have to Answer the Mail I Leave conjures an aura of ritualized preparation. Whitson carefully gathers and organizes invisible remnants someone (maybe they) left behind; they spit out chicken bones, and they carve the space with rounded arms as though to push apart particles in the air and gather them together again. In one moment, they arrange four piles of white fabric into a square and place stacks of manila envelopes on each pile. Text is gently extracted and read from some envelopes, while heavy cow bones tumble out of others with a THUD! “If whales can be protected, why can’t we?” Whitson reads from one piece of paper.

In séancers (excerpt), Jaamil Olawale Kosoko is the medium who brings truth to life. Scenes begin with an obscured figure sashaying to the altar, his robe billowing in his wake. In the middle, a messy haired blonde exposes her chocolate back while reciting Power by Audre Lorde. There’s also an orange jumpsuit and white serial killer face mask; a black man in chains; and a peachy blow-up doll. In a powerful offering, Kosoko joins Ruby Sales’ voiceover to recite the interview Where Does It Hurt. With performance support from artists M. Lamar and Jeremy Toussaint-Baptiste, séancers presents capricious sanity calmed by mystical chaos. 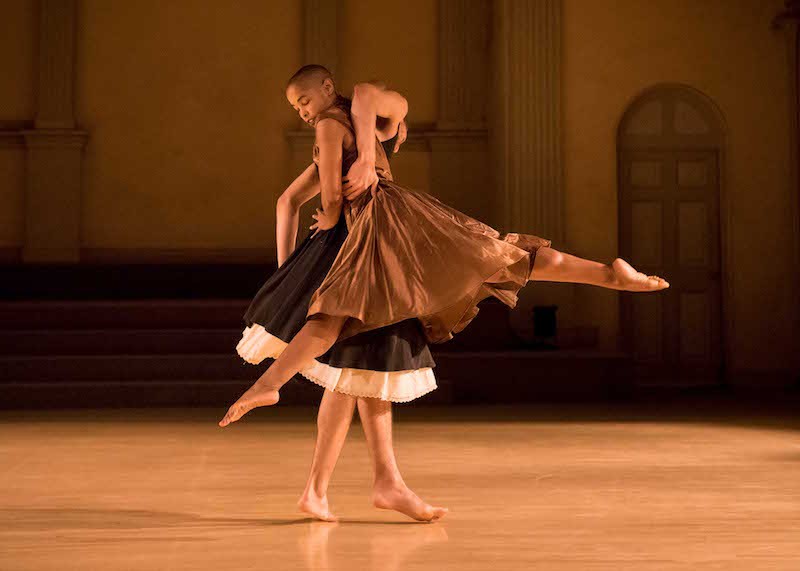 Hearn’s maythesebodiesbareknownothingofthisvacancy [excerpt from make me a monster] is hauntingly gorgeous. Hearn sings from the balcony of St. Mark’s Church-in-the-Bowery while dancer Stanley Ganbucci saunters below in a loose black dress. Hearn is ominous as a backlight outlines her frame. She descends to the main floor and puts on a new dress with Ganbucci’s help. They proceed into quick bursts of liquefied spirals that suspend into stillness. As Hearn’s head rotates in and out of the socket carved by Ganbucci’s hand, in a playful, yet melancholy encounter.

Artist Chazz Giovanni Bruce concludes the night with Jonathan Gonzalez’s Lyric baby. The lights fade on and off with a hypnotic rhythm. Wall-cracking bass vibrates the church’s foundation and our eardrums. Bruce whimsically surveys the space while his journey is tracked by the trim on his flashing shoes that alternate from blue, pink, purple, and all the colors in between. From pants reminiscent of a clown car (he pulls a series of unlikely objects from them) to a breathless epilogue, Lyric baby marries the curious, the self-indulgent, and the triumphant.

For Impressions of "skeleton architecture, or the future of our worlds" Danspace Project's Platform 2016: Lost and Found, Eva Yaa Asantewaa-Curator

AND Get Involved: Join the conversation and shape a dance world worth talking about.
Share your thoughts on Danspace Projects Platform 2016 here in our #AudienceReview Section