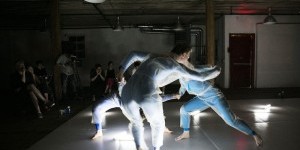 Impressions of: John Jasperse and "Within between" 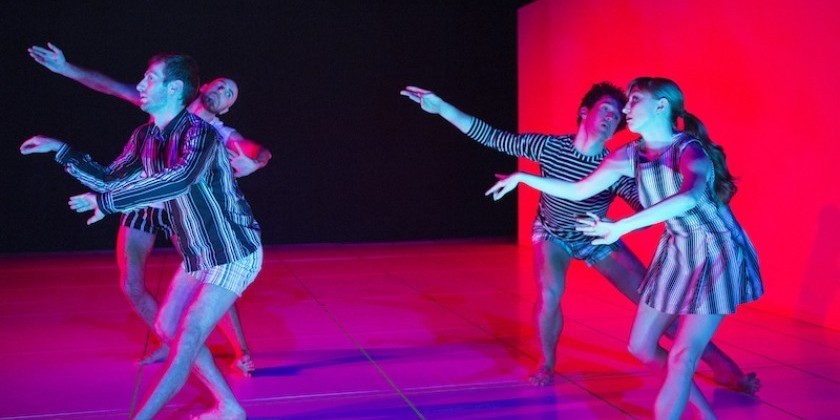 Even before the dancing begins, it is difficult to look away from the New York Live Arts stage as set for John Jasperse's Within between. On the brightly lit white floor is a grid pattern created with lime green tape, and on either side of the stage, are tall, white boxes in place of wings.  A long metal pole sits in the middle of the space.

The house lights stay on as Simon Courchel enters, picking up this pole. He walks slowly forward with the rod held at shoulder height. Audience members giggle and Courchel lets a small grin slip as it becomes clear that this instrument is going to break the fourth wall (quite literally) and reach into the audience. Courchel stops when he reaches the middle of the house, and traces the head and shoulders of an audience member with the long stick. He repeats this process with several more spectators as he backs up, slowly withdrawing. 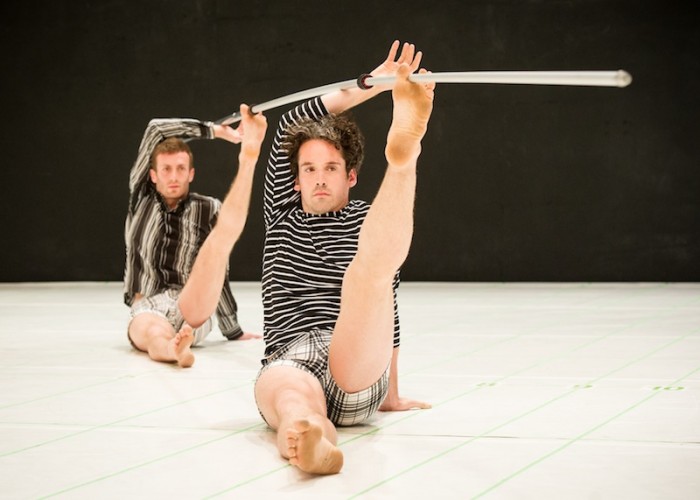 This is the first in a series of playful challenges offered to the audience by the four dancers of Within between. Throughout the work, they enthusiastically and masterfully try on a number of movement languages, managing to make each new idea appear fully realized before dropping it at a moment's notice to try something else.

Stuart Singer, the second dancer to enter the space, joins Courchel in the pole manipulation. They perform a simple, mesmerizing duet, balancing the prop on various body parts. Next Maggie Cloud and Burr Johnson enter to participate in the game. The pole is soon abandoned as the dancers pick up their next thread, a synchronized series of crisp ballet positions. The classicism doesn't remain for long. Soon tendus slump, arms snake their way to arrive at positions in unfamiliar ways, and hips jut. As the sequence deviates farther and farther from its original form, musical performers Jonathan Bepler and Megan Schubert mutter, "Is this OK?" and "Oh my god." 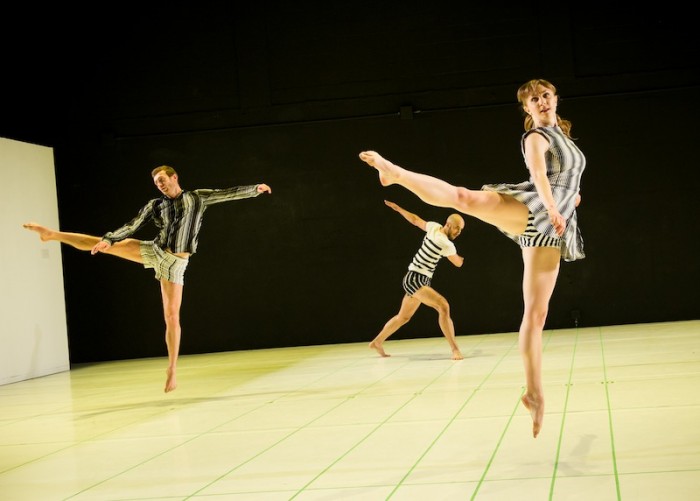 Their mutterings are an apt reflection of the work as a whole, which seems more focused on posing questions than on making statements. "Do you like this? What is this? What if I show you something else?"

And there are many other something elses: whimsical wigglings, spirited jumps, a body-slapping, percussive romp, and a section where the dancers lift, flip, and pass each other around. There are a few moments where Within between gets stuck in an idea, but ultimately this doesn't detract from the enthralling quality of the work. Duration and repetition are, after all, ideas of their own.

Lenore Doxsee's lighting reflects the theme of playful change. At times, the entire space is flooded in a bright pink-red, and at one point some of the squares on the floor are lit up in so bright a green that the dancers seem to be moving inside a video game. These elements fluctuate as rapidly as the choreography.

By the end of the dance (which features Courchel and Singer performing a duet while giving each other instructions with their eyes closed) Jasperse has taken the audience on quite a full journey. An enormous amount of space has been traversed, yet it feels as though no time has passed -- the trip was so satisfying.