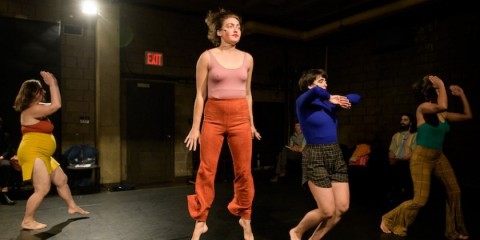 More info here (advance tickets are sold out, but 10 walk-up seats will be available for purchase each evening).

Which of the following offends you?

Regardless of what letter you choose, all of the above appears (a and c are referenced while b and d are performed) in Juliana F. May’s Folk Incest, which received its world premiere at Abrons Arts Center. There’s plenty more too, much of it unprintable and/or indescribable for publication. For the easily offended, you will likely be offended.

And yet, for as shocking as the 45-minute work may be to some, I didn’t find myself disturbed by the material. To do so seems to misunderstand the point or to belabor the wrong point. In other words, if a woman curses up a blue streak because someone intentionally dropped a hammer on her foot, should you be offended by her reaction or the inciting action? I would argue that the hammer dropping should garner the bulk of your outrage.

Folk Incest unpacks the aftermath of a thousand hammers dropped, the piece gushing like an infected, untreated wound. It exposes and releases the trauma of the collective female experience where the pain throbs so acutely that the only sane artistic response is insanity, absurdity, and bawdiness. Maybe then, someone, anyone, YOU will pay attention and give witness.

It opens with Molly Poerstel struggling to enunciate, I hate when people talk about irony like that. Coughing, fidgeting, and tripping over her tongue, she prepares both herself and us for the inevitable frustration of trying to winnow the messiness of outrage into coherence. Soon, four women join, their faces painted with thick stripes of blush and lipstick. They peel their leotards to their waists and drape jeans around their necks like Jewish prayer shawls.

If you dropped in from another planet, this might look like the convocation of five frisky women. With an almost ritualistic devotion to 4/4 timing, they skip, saunter, stride, and, in one instance, stepover turn. Each action thuds in time with Tatyana Tenenbaum’s score of starry electronica, hitting squarely in the middle of the beat.

If you are of planet earth circa 2018, the dissonance between the quintet’s aerobicizing and the foulness is vast. They babble, they warble, they incant, and they talk over each other, telling dirty, nonsensical stories. Expletives surge from the performers’ mouths like an unused faucet that’s just been turned on. Sometimes, I lose the thread, all the other words smeared by the grime of the four-letter words.

The performers sport mic packs, which amplify their voices through the speakers. Because the piece is performed in the round, identifying who’s talking proves difficult. Instead, the disembodied voices pour through the room like they’re piped in from a performance next door or maybe halfway around the world. The depersonalization underscores the universality of trauma and the few socially acceptable ways for processing it.

Near the end, they recite, This is how I feel.

Exactly. This is how I feel.