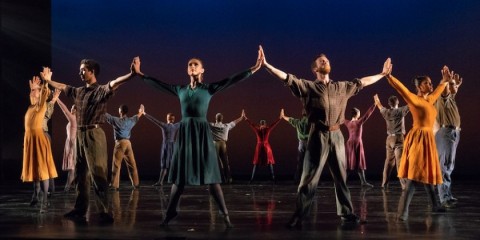 Americans think of modern dance primarily as an art of personal expression. Our choreographers, who are unfailingly brave non-conformists, set out on their own to explore and conquer the world. We call them “pioneers.”

All well and good. Yet a choreographer like the late José Limón [1908-1972], whose Limón Dance Company survives as one of our top-ranking modern dance “legacy” troupes, was not a lonely trail-blazer.

His repertoire, brilliantly performed by a new generation of dancers, still affects us today precisely because of its social concerns. Indeed, the troupe lasted beyond its founder’s death because Limón was confident enough in his own powers to share his company with Doris Humphrey and others, making it a repertory group from the outset. While illuminating the inner world of the individual, his dances also consider the fate of all of us together in humanity. These works rise to a great height because their creator discovered the ideal ratio of personal expression to empathy. While clearly superior as an artist and human being, Limón accepted his role as a member of society identifying with and seeking to uplift the downtrodden. Without understanding this attitude, and the self-imposed limits on our independence, we cannot claim to understand American modern dance.

The Limón Company’s terrific 2018 season, Colin Connor’s second as artistic director, placed the founder’s legacy in perspective by contrasting two of Limón’s most famous group works, The Unsung and Missa Brevis with more intimate novelties by a trio of up-and-coming choreographers. Sandwiched between the masterpieces were small but piquant dances by Rosie Herrera, Adam Barruch and Yin Yue, as well as a dance by Connor. All were beautifully rehearsed; and a handsome group of youngsters eager to make these works their own performed them with conviction. The troupe appears re-vitalized.

In The Unsung, Limón commemorates the lives of seven Native American chieftains, which he distills to their heroic essence. In contrast to the way Native Americans are often depicted in films and on television, this sophisticated portrait is entirely free from clichés. Limón’s chieftains are bare-chested, with the merest hint of buckskin fringe on their trousers, stamping the ground and wearing their splayed fingers on their heads like feathered war bonnets as they gather in a circle.

The power of The Unsung lies not only in its extraordinary composition, especially in the transitions between solos, but also in its laconic style. Instead of commissioning a musical score, Limón created his own by having his dancers drum their feet on the floor. It’s up to the men to make this percussive score work; and they do it marvelously, with Terrence D.M. Diable especially subtle as Osceola. Another standout was Jesse Obremski: windblown in the air, then tumbling and delicately suspended in Tecumsah’s solo. Stealthy or wild, attacking, grieving, and fleeing in distraction, these dancers brought Limón’s glorious manscape to life.

Featuring the company’s women, by contrast, Connor’s The Body is a House Without Walls suggests an exercise in framing. At the outset, a group surrounds Brenna Monroe-Cook as she lies on the ground apparently unconscious. Then one of the women takes a pair of shears and cuts the soloist out of her red dress, as if freeing an accident victim from the wreckage of her life. When Monroe-Cook rises, the others frisk and gambol around her weighted figure, until the time comes when they leave her tottering unsteadily but reaching upward. According to Connor, this dance, compassionate in the Limón tradition, is “about the regenerative power of memory.”

Querida Herida (Wounded Beloved), by Herrera, offers a tongue-in-cheek account of a love affair gone wrong. As Monroe-Cook and Jacqueline Bulnes cling to each other, shuffling, with their faces buried under their hair, one unzips the other’s costume to reveal a scarlet gash. The wound sparkles, glamorizing pain and sex rather like the hyper-real photographs of Pierre and Gilles. Several zips and unzips later, the protagonists of Querida Herida are battling ferociously, stabbing each other with their hands, while José Feliciano croons and sobs, singing that he wants “to bleed, drop by drop, the poison of your love.” We can tell Herrera doesn’t take broken hearts too seriously, though, from the interlude in which Angela Falk scampers across the back of the stage like an acrobat performing tricks and cartwheels along a length of red fabric. This impish, would-be aerialist turns the tragedy into a circus.

Colin Connor's The Body is a House Without Walls; Photo: Steven Pisano

Another duet, Barruch’s Conjurations, presents a relationship in which such messy emotions are suppressed, rendering the partnership even more horrible. Diable and David Glista stand in place making origami gestures and twisting their bodies; they stalk each other around the perimeter of a square of light; and finally they connect. Their dancing, however, remains bloodless and antiseptic, as if the whole encounter were engineered. An invisible string connects them — perhaps the only vestige of a long-forgotten desire. When Glista forces Diable to the ground we seem to see a crack in this machine, but Glista is not a dancer to be easily tamed. At least these guys don’t have cell-phones.

The final new work, Yue’s No Room for Wandering, is also a duet. Vaulting over each other, sliding and making huge, stretchy moves, Obremski and Tanner Myles Huseman grapple and seek to escape each other’s control, until one of them makes a conscious decision to surrender and place his head in the other’s hands. No Room for Wandering features intricate combinations that display Yue’s mastery of space; and it kindles a sense of dramatic urgency. Yet it lacks the economy that is a hallmark of the Limón repertoire.

Each of this season’s programs concluded with Missa Brevis, with statuesque Mark Willis assuming Limón’s own role as the solitary man dressed in black, who stands outside a group of people and observes them. What could be more relevant today, than this anti-war masterpiece in which the tightly-knit dancers cringe and gaze upward as if anticipating aerial bombardment? The choreographer was recalling the horrors of World War II, but here we are again, with US missiles falling on Yemen. More blackouts. More suffering. In the world of this dance, however, there are also exaltation; solidarity; and the exemplary spectacle of the artist who takes the burdens of the world upon his shoulders and shows us a better path.

DANCE NEWS: Dancing Beyond 2022 Supports The American Cancer Society with Dance Against Cancer