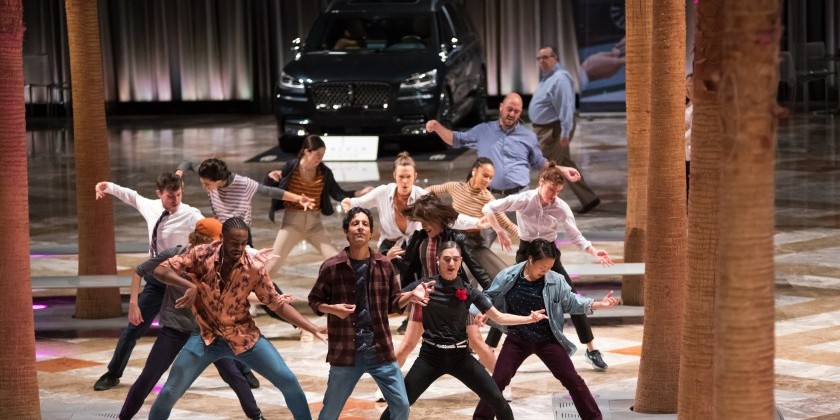 Amidst the polished marble and 40-foot palm trees of the Winter Garden atrium at Brookfield Place, commuters stroll on purposeful diagonals, kids jump and run, chatty women push strollers, and men rush to catch trains. This activity before Monica Bill Barnes & Company’s production of Days Go By is a show in itself. The chaos looks like choreography, and passersby, unknowingly on display, become points of interest.

Sitting on velvet cushions, we, the audience, are given headphones through which soft calypso music plays. Suddenly a voice begins narrating the events happening around us. A man stands up and glances repeatedly toward the balcony as we hear the sad story of a friend being stood up. His efforts to wave at a no-show date grow dejected and flaccid.

Narrator Robbie Saenz de Viteri discloses the stories of more people crossing the plaza, and I wonder just how many of them are part of the show and how many are oblivious commuters heading home? He directs our attention to a couple having coffee as he tells us of a marriage grown stale. When two men dash past in nearly identical purple shirts and dark pants, we hear the amusing story of college friends who pursued the same career path.

Soon, the separation between performer and non-performer becomes clear. Walking patterns develop into choreographed phrases peppered with hops, chassés, and pivots. A woman paces, talking on the phone, her movements getting larger and more animated as de Viteri recounts the argument she is having with a lover. More performers gather, easily falling into the intricate stepping sequence with flash mob-like seamlessness. Like a barely controlled tantrum, the mob culminates in punchy, rebounding unison. Matching the walking motif, de Viteri’s words have rhythm and, often, humorously rhyme.

Monica Bill Barnes & Company brings dance where it does not normally belong. Creating and producing each new work from its own rulebook, the troupe has danced to radio interviews on the biggest stages in the world, hosted weekly shows in crowded offices, and led choreographed exercise routines in art museums. Within each of these borrowed environments and varying contexts, the company consistently finds humor in our everyday triumphs, failures, and humdrum moments.

Barnes’ choreography, pedestrian yet theatrical, complements these prosaic moments, and the narration energizes familiar situations. A woman changes shoes on a bench, lost in a reverie of her move to NYC and her budding dance career. As her posture yields to gravity, she remembers her favorite costume in the chorus of a Broadway show, the sharp sequins that cut her unable to penetrate her joy. The only performer dressed in all black, Barnes shadows this musing and others, the ghost of memories.

Days Go By retrogrades through each “day in the life” until we are left with the image that began this journey — a man waving to no one. Just like that, the atrium was merely an atrium again, and another day has gone by.

Impressions: Monica Bill Barnes & Company's "One Night Only (running as long as we can)"

THE MUSEUM WORKOUT at The Metropolitan Museum of Art