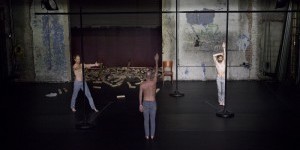 Impressions of Pavel Zuštiak and Palissimo Company's "Custodians of Beauty"

For the satisfying close of this ninety-minute production, Nicholas Bruder waves an enormous black flag downstage, in the face of the audience. In his current bearded state, Bruder has a look that conjures thoughts of maniacal manipulators like Rasputin. He seems born to carry that symbol of anarchists and pirates, clearly one that speaks to the Czech-born choreographer Pavel Zuštiak.
No better punctuation could be found for a production peppered with a series of quandaries conveyed through sculptural images. As the audience stumbles through the dark to get to their seats, an ethereal aria sets us up for romance. But quite the contrary, Zuštiak sets us on edge with the grating sounds of static accompanying graphics projected on a scrim that soon falls. “WORD” is projected on the back wall. Two men and a woman dressed in black, morph in and around each other on that wall, slowly traveling from left to right. Later, these three largely entwined, now mostly naked, creep from left to right across the space which seems to expand with each crawl. Their heads are generally hidden, the curve of their backs prominent. Upright, these three jog expressionless, side by side, in a line, until they break unison; for one delightful moment, Emma Judkins’ asymmetrical run/jump seems free. 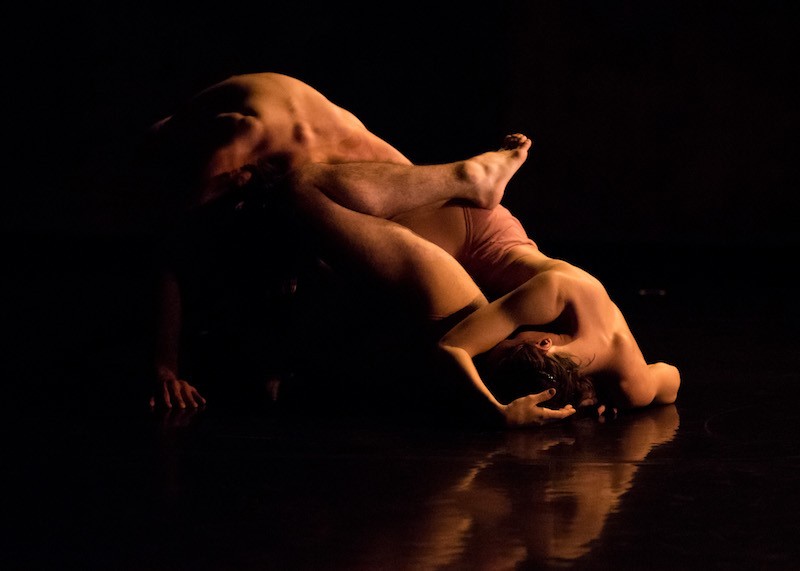 Photo: Ian Douglas
Bruder appears topless downstage right to execute gestures with cryptic foreboding. The gestures seem of less importance than the manner of delivery, which is calm and stoic. The joy or release of dancing is irrelevant here, except for the brief solo by Justin Morrison who has a marvelous liquidity. Zuštiak writes his pensive odes with a corporeal language that resonates with sad overtones. 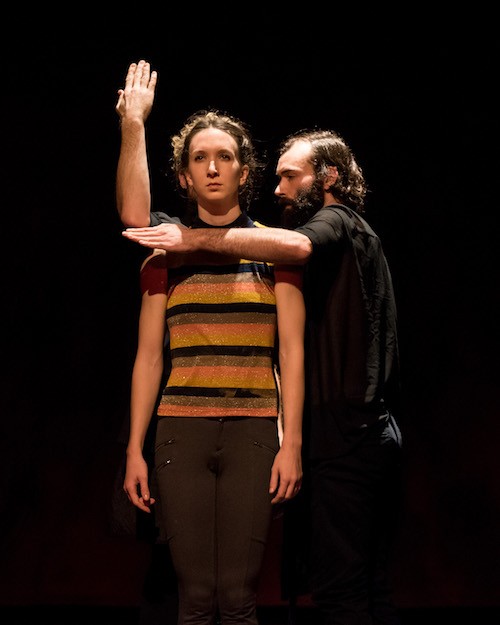 Photo: Ian Douglas
For comic relief towards the close, Zuštiak projects the text of imagined responses to his work which swing between euphoric to indifferent. His three “Custodians of Beauty" gaze at the red velvet wall which moves to several positions during the production as though it is one of the objet d’art assigned to their care. The wall takes downstage center for its bow.