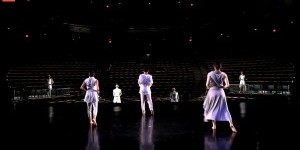 So wonderfully strange. European-styled existentialism but from a woman’s point – The Second Sex indeed!  “That Disgusting Thing Called Intimacy” – presented by Jersey City Theater Center (JCTC) – jctcenter.org – at Merseles Studios in Jersey City – provoked such a  wide range of emotions that the initial audience reaction was one of being sublimely perplexed.

A long pause followed the end of the performance piece, then followed by enthusiastic applause. We were agog, because other than experiencing performance art and avante garde dance of the highest caliber, we did not really know what we saw. It was if there was either too much meaning or that the actual meaning existed on such a subconscious level that understanding it was something that defied verbal explanation.

This indeed was dream logic at its finest, both psychological and tactile. Nonetheless, everyone in this near-sell out crowd remained for the usual JCTC Talk-Back (usually at least a few depart). Maybe we all needed a type of closure after these two young performance artists brought us along on an often uncomfortably honest, always exhilarating, immersion into the experience of being a young woman in today’s world – from meeting social expectations to objectification – that seemed to comment both on our consumer culture and the human condition, that is to say, contemporary and eternal.

It starts off with the two dancers – Sally O'Neill and Tuva Hildebrand, who met and trained at the Royal Swedish Academy of Ballet – standing and staring at the audience, and this goes on for a few minutes longer than it seems it should, long enough to make us squirm – later, there’s equally extended dance routine where they imitate stripper/erotic dance moves – with simulated sex gyrations and squirting water on each other – they “make it slap” in the parlance of our times – but that too is prolonged long enough to transcend any arousal – so that we ask ourselves, why is identity so based in the body (and what are the specific challenges faced when that body is female) – are our selves so tied to the physical form – and all the thousand shocks that flesh is heir too? – thus defined by perceptions of others and expectations induced by a culture increasingly dominated by the image– or is the self, your identity, or something other, better. The piece doesn’t give an answer, but it does get us to ponder the question in new, deeply psychological ways.

One of the first “scenes” of the is of  Sally contorting her face  to the treacly Air Supply opus, “Can’t Live if Living is without You,” and as this particularly annoying ear-worm goes on, her smile becomes distorted pain, a pretty visage evolves from happy to hideous. She’s dancing with her facial muscles! Basically, the two unnerve the audience from the get-go, and the messing with your thoughts and feelings just gets more intense.

“That Disgusting Thing Called Intimacy “is  a multimedia work, there’s a clip of Amy Winehouse in her last public performance, bestowing a context – surely, she was a victim of over-exposure and celebrity culture as much as heroin –  and then another clip of a the famous (I would say infamous) There’s no such thing as society speech by the Europe’s most famous 20th century witch, Margaret Thatcher, where she ridicules the concept of community, declaring there’s only the individual – adding layers of political context and ambiguity to this very elusive concept of identity.

In the spirit of Karen Finley, there performers crawl through piles of dirt and famine hygiene projects – an amusing critique of another feminine image, earth mother natural women – and the no pun intended climax seems to be the realization of the title – intimacy – where they embrace and sprawl in a sexual interchange that ends in licking the props, which include high heels and lingerie,  now scattered on the bright white floor – the dancers are in white and the dirt which first poured out of their garments is now smudged on their clothes and alabaster skin – showing that even as two individuals make the ultimate connection – intimacy— neither can be free of either societal preconditions of body image or the often icky priorities of that actual body. Making love gradually involves the entire stage set – so wild and in-the-moment –  I was reminded of the Yeats line, “love has pitched its tent in excrement.” The groping, the gestures, the frolicking –it appeared nonchalant in some ways, but was obviously studied, precise and deliberate – making the everyday and natural heightened. Art isn’t supposed to make you comfortable, it should provoke unanswerable queries: what is this life?

“That Disgusting Thing Called Intimacy” is  a multimedia dance performance that invites audiences to take a unique, provocative and fearlessly honest exploration of  gender, political power structures, sexuality and popular culture.  Sally O'Neill and Tuva Hildebrand, who’ve been creating collaborative dance and performance art pieces since meeting at the  Royal Swedish Ballet in 2004. They’ve performed together in New York as well as throughout Europe, including Sweden, Hungary, Serbia, the Netherlands, Belgium and England.

O'Neill and Hildebrand are  artists in residency at JCTC, New Jersey’s fastest growing nonprofit arts organization, where they developed “That Disgusting Thing Called Intimacy,” which is being presented as part of the Identity series at Merseles Studios, 339 Newark Avenue, Jersey City.  This collaborative project premiered in February 2015 at Theater aan de Rijn in Arnhem, Netherlands, and has been performed in New York and Brooklyn. “That Disgusting Thing Called Intimacy” will be presented again Saturday, April 2nd, 8:00pm-10:30pm. For tickets and more information, visit jctcenter.org.

Timothy Herrick
Timothy Herrick is a Jersey City-based writer and journalist. Some of his writing can be found at Timhrklit.com and he sometimes blogs at Timothyherrick.blogspot.com.