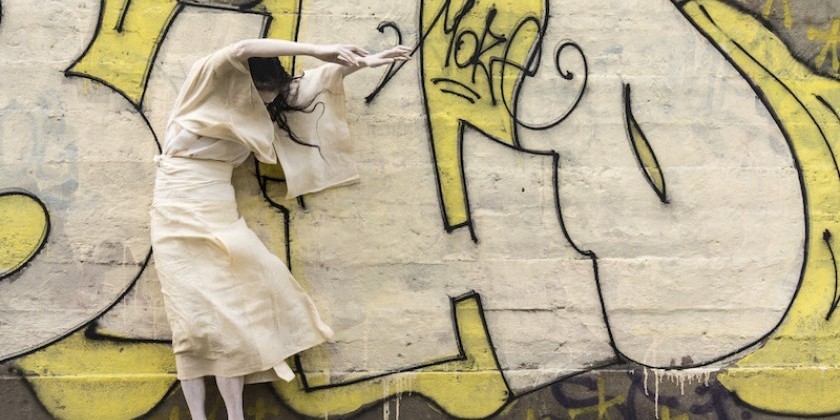 “I am not a political art maker,” says Eiko Otake, responding to questions about this season’s Danspace Project Platform, built around her provocative solo program, A Body in Places.

“I don’t particularly appreciate art [that has] too clear a message,” she continues. “So I am not making political art, and I don’t want you to mistake. My solo work is not political.”

This declaration frustrates me, and leaves me dumbfounded. It feels like a huge stumbling block. Coming from an artist who has placed her health at risk by dancing in the landscape poisoned by the triple meltdown at the Fukushima Daiichi nuclear plant in 2011, Eiko’s statement is hard to accept.

During the “Conversations” preceding the Fukushima memorial at St. Mark’s Church In-the Bowery, on March 11, Gabriel Florenz, the director of Pioneer Works in Brooklyn, made a comment that resonated strongly with me. He mentioned that in our culture politicizing art produces knee-jerk disapproval; and wistfully he described Eiko’s dance of protest as balanced between “futility” and “meaning.”

So when, exactly, did it become a truism that art with a political message must be less subtle or sophisticated than art that deals with other human themes, or art that has no message at all? Or, to phrase the question another way, when did it become normal for us to expect that artists would obsequiously mind their manners while nuclear plants proliferate, multi-national corporations rampage unchecked and the burning of fossil fuels raises global temperatures to life-threatening levels? When did we resign ourselves to futility? Did this shift in our attitude toward the arts occur during the McCarthy era, to be reinforced during the so-called “culture wars” that Senator Jesse Helms launched in the 1989? Did Susan Sontag (of all people) drive the stake into politically attuned art with her influential essay Against Interpretation, even as American youth was rebelling? Was Yvonne Rainer’s Trio A partly to blame?

Art that exists purely to entertain should be dismissed as one dimensional — not art that challenges the status quo and demands we evaluate competing notions of how to live as a society. With apologies to Théophile Gautier and the art-for-art’s-sake crowd, the theater may not be a railroad but we still expect it to take us somewhere. Yet we now live in a culture so tyrannized by the rich and powerful and so browbeaten by the corporate media that any suggestion artists might address serious issues comes under direct attack (as “victim art”) or, more insidiously, finds itself sneered at and derided as childish and in poor taste.

We still describe artists as “revolutionaries,” though the word has all but lost its meaning. Without compromising their artistic integrity, many choreographers continue to produce challenging political commentary, from Paul Taylor’s Black Tuesday to Liz Lerman’s Healing Wars, and from Ronald K. Brown’s Come Ye to Jane Comfort’s An American Rendition. Yet how often are the meaning and the context of such works discussed? The arts community as a whole has grown feeble, tainted by the prejudices of the ruling classes. Artists fear losing government grants. They fear conservative, money-grubbing presenters will shun them. They fear snobbish critical attacks; and they fear offending the “mainstream” audiences who now expect art to resemble the banalities of corporate advertising.

No one wants to see the arts reduced to sloganeering, or agit-prop. Art remains a deeply personal way for an individual to share his or her experience of the world; and no one can tell artists what kind of art they ought to make. On the other hand, those who readily tell artists what NOT to make, and who chide them for addressing political concerns, are unquestionably allied with the tyrants. Although I understand and sympathize with Eiko’s wish that audience members be free to make their own discoveries, to me it also seems tragic that in our day even a dancer as supremely courageous as Eiko — someone willing to expose her body to deadly radiation to make a point — still finds it necessary to downplay her activism.

In addition to the “art for art’s sake” doctrine, the 19th century bequeathed to us the idea that artists are superior beings capable of leading society into a future only they can envision. In America in the 21st century, however, this idea has been seriously compromised. By abandoning the notion that art can have a political purpose, artists risk losing the attention and respect of a whole generation of young people whose inheritance will be a horribly damaged world. Why should this generation take artists seriously?

Last year, at a symposium hosted by the Martha Graham Dance Company, the artistic director of P.S. 122, Vallejo Gantner, told a story that illustrates the tension between competing views of the arts, and the quandary artists and presenters face today. During the Occupy Wall Street protests in 2011, Gantner had gone to Zuccotti Park in Lower Manhattan attracted by a poster that showed a dancer balancing atop that quintessential symbol of the financial sector, Arturo Di Modica’s sculpture “The Charging Bull.” Designers at the Adbusters Media Foundation had chosen the image of a dancer, presumably because (notwithstanding the antics of Jeff Koons) art is still widely viewed as antithetical to commerce. Yet Gantner said that when he talked to the Occupy protesters he met about the performances at his theater, none of them was remotely interested. To these young people, artists had become irrelevant.

I repeated this story to Eiko, and asked her, “How do you bridge the gap between the people who want to create positive change, and the people who are making art?”

She replied, “I’ve been teaching for ten years. I talk a lot with young people, and I know that even though they grow up differently now, they are not that different from my young time. And if grown-ups put themselves out there, with both remorse and self-criticism, yet at the same time a strong desire to be human and a strong desire to be against corporate greed, people get it. People get it in various different ways.”

Reiterating that her stance is apolitical, even when her dancing draws attention to the dangers of nuclear power, Eiko says, “Again I don’t do it for the effect. I do it because it’s my honest concern, and without following my concerns I am no longer me. But I also know that, when I do it, people respond. How many people? I don’t know. How effective am I politically? I don’t know, because I don’t have a way to measure effectiveness, and I don’t think I even want to measure effectiveness.

“It’s important to have many things in your mind, not many physical goods or expensive things,” she continues. “The things we cannot buy with money, those make us human. And I think when we have those things in our strange drawers they pop up and help you to go one step farther, or linger someplace, or meet someone with a similar interest. So I’ve been doing this in a very small way, and this is my work. I may not be very efficient, but I do it.”

While admiring and loving Eiko, I wonder if this approach will be enough to save the arts from irrelevancy in a world that faces environmental catastrophes so dire they can blight the earth for tens of thousands of years. Clearly her work is not futile, since it has the capacity to transform an observer’s experience of time; to build emotional bridges to faraway places; to implant memories; and to open viewers’ minds to questions and new ways of thinking.

To me it also seems clear, however, that we must combat our acquired prejudice against political art; and that practical steps must be taken to connect the individual’s experience of works like A Body in Places with the collective social movements battling environmental destruction and striving to change the world. Otherwise, more Fukushimas are inevitable — if not much worse — and like Eiko we will all be left asking ourselves, “Why wasn’t I more involved?”

Huddling miserably in a corner, remorse will become our theme.