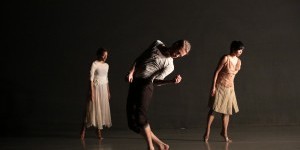 Clara Barton had a dream two nights before she died. Fifty years had passed since the Civil War nurse had rushed to the front lines to tend the wounded and the dying; and she had outlived most of her patients. She was comfortably retired and enjoying her celebrity as the founder of the American Red Cross. Yet in her dream the old woman was on the battlefield again, knee-deep in gore while all around her the shattered, limbless bodies of soldiers lay strewn with no one to care for them.

Barton shares this nightmare with us as a character in Healing Wars, the brilliant dance-theater piece by choreographer Liz Lerman that made its local debut on September 25 as part of the Peak Performances series at Montclair State University, in Montclair, NJ. Standing at the edge of the stage and speaking confidentially, as if to a friend, Barton recalls waking from her flashback to find herself lying in a soft bed at home. Then, she confesses, she felt ashamed.

Dancer-actress Tamara Hurwitz Pullman, who plays Barton, makes this revelation matter-of-factly sounding thoughtful and somewhat perplexed. Like the other cast members she employs a muted acting style that allows Healing Wars to burrow under a listener’s skin in a way hectoring never could. Barton’s story makes no demands on us. And yet, immersed as we are, by now, in a scenario that toggles back and forth between historical accounts of the Civil War and tales of soldiers killed and maimed on battlefields today, we can’t help but identify with Barton’s confusion and with her survivor’s guilt. How did we get to a place where a Civil War nurse’s nighttime dread recalls the all-too-present reality of American troops who cannot escape the so-called “War on Terror”? And do we feel ashamed yet?

Lerman doesn’t come right out and say we ought to. Yet she won’t allow us to turn away and resume texting, either. Healing Wars was created to commemorate the Civil War’s 150th anniversary. Yet far more pointedly the show helps us to remember what is happening right this minute. The ongoing war in the Middle East has produced thousands of veterans suffering from post-traumatic stress disorder and other injuries, yet society barely acknowledges them and we can’t seem to have the honest discussion that might stop the blood-letting. The scandal that erupted earlier this year over shoddy care at our veterans’ hospitals is nothing compared to the scandal of public helplessness and indifference to the war being waged in our name. Lerman’s theater places the consequences before us gently yet insistently.

Healing Wars is based in the conundrum that medical professionals must deal with, when their mission to heal bodies and minds intersects with the soldier’s assignment to commit murderous acts of destruction. In addition to hearing from Barton, we hear from a modern-day physician on a lecture tour. Michael Scott plays this character, whose dapper assurance breaks down when he remembers a young serviceman whose life he could not save. Dancers portraying military recruits describe their reasons for enlisting; and cast member Paul Hurley, a bona-fide Navy veteran, describes how he lost his right leg in Bahrain.

These true-life stories and others supply the questioning framework for Healing Wars, divided into sections with titles like “Premonitions” and “Surgery” and addressing various issues related to war, medicine and the ways people’s minds respond to traumatic events. Typically Lerman’s exploration of these subjects is far-reaching and intellectually curious. But dancing remains the conscience of Healing Wars. That’s because the human body — torn apart and disfigured in war, or merely discomfited as it occupies a theater seat — is shared territory that permits us to understand what other people feel. Nothing anyone can say registers as profoundly as the sight of a metal tool where we know Hurley’s leg should be.

Our own bodies are implicated from the start, submerged in Lerman’s investigation as we enter the theater through a back door and shuffle past a series of tableaux vivants.This backstage area resembles an attic museum. Constructed of raw wood and exposed brick, it stores the residue of the Civil War: fading tintypes, dusty bedsteads and objects filmy with disuse. Here we learn about the women who disguised themselves as men so they could join the fight; about the burial details and what happened to returning veterans who couldn’t control their outbursts. Tied to a rocking chair, dancer Ted Johnson is left alone to struggle with memories of violence he can’t dismiss. Letters dotted with red sealing wax festoon a tree that hangs over Clara Barton’s desk. According to the label on this tableau, Barton received more than 60,000 letters from people searching for loved ones who had disappeared in the Civil War. She confirmed the fate of 22,000 of those missing.

It’s a relief to step out of this musty, psychological trap and onto the stage, where Hurley and Scott are chatting and Hurley explains how he grew accustomed to the discomfort of wearing a prosthesis. Getting people to stop and listen to such tales — really listen — is one of Lerman’s more modest goals. Once we’re in our seats, and the audience’s usual perspective has been restored, spare but wonderfully expressive movement brings the stories to life. As we hear the tale of a disturbed Civil War veteran who made it home but could never again keep still, George Hirsch flits around a bench dodging Pullman’s attempts to put her arm around him and console him. Untied from his rocking chair backstage, Johnson remains cramped with despair his eyes focusing on a disaster only he can see. While seated on the bench, Hurley, whose navy buddy was killed in the attack that took his leg, performs an amazing duet with Keith Thompson. Off-balance but still able to carry Thompson across his husky shoulders, Hurley seems to juggle the weight of his lost friend.

Samantha Speis plays the only imaginary character in this mournful gallery. She’s supposed to be an angel who harvests the souls of the fallen. Grappling with Johnson, she crouches, tugs at him and leaps onto his back. Yet the outcome of their tussle does not seem inevitable, and in a duet filled with surprises they take turns stalking each other. Speis adopts a swagger when she leads a small platoon of dancers on a “suicide march,” a grimly ironic parade in which the marchers pantomime the techniques veterans use to kill themselves when their pain becomes unendurable. Poignantly contrasting with this dance are YouTube videos of young service members at play. Cheerful and still unscathed, they pump their arms and swing to hits like Lady Gaga’s “Telephone,” and we see the young lives we have placed in harm’s way.

David Israel Reynoso has designed everyday costumes that shift between historical eras almost imperceptibly. His unobtrusive yet evocative backdrops for Healing Wars consist of bullet-pocked walls and columns, and curtains like strips of gauze bandages. Kate Freer projects scraps of old Hollywood movies, and flocks of birds like spirit messengers.

At one point, Hirsch tells the story of a young man from a family with a long history of military service, whose father prompted him to enlist in the wake of 9/11. His father’s question, “So, what are you going to do now?” seemed to have only one possible answer. Thirteen years into a war whose motives seem increasingly tangled and whose dreadful costs are mounting, the answer should be far less obvious to everyone. Kudos to Lerman and her team for refusing to stand by passively and for demanding we pay attention.